Thiago: “it was a perfect day”

Thiago: “it was a perfect day”

Thiago Alcántara put in a fine performance on his first start in a La Liga game for the team against Villarreal on Saturday and after the match he told reporters: “it was a perfect day”. 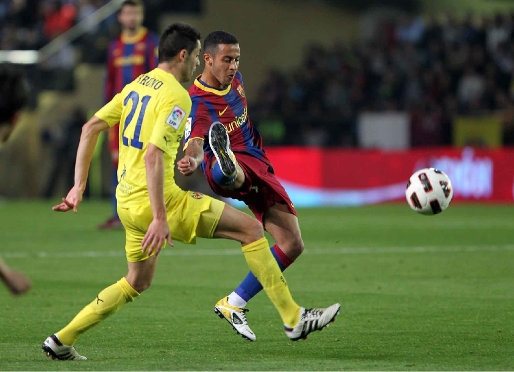 Valdés and Busquets up for suspension

Víctor Valdés and Sergio Busquets will miss next Saturday’s game against Almeria after they both saw their fifth yellow at Villarreal– now only Mascherano and Messi are a card away from suspension.
Thiago has of course been featuring for both the first team and the reserves this season and so Saturday’s wins had a special importance for him: “we had two more great results this evening – especially the B team’s, that was maybe even better than Madrid’s defeat”. The youngster made 123 successful passes from the 136 he attempted and played out the full 90 minutes, but he was modest about his efforts, claiming: “you could see the experience of all our players out on the pitch –except for me”. 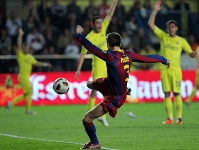 “The goal happened so quickly –I think it hit me on the chest, I don’t know, maybe on my arm too. It happened so fast I didn’t have time to think”.

“It’s an eight point lead with eight games left to play… it’s an important lead, but we have to keep playing as we have been – it’s in our own hands now, but it’s not impossible for Madrid –it’s not done and dusted yet”.

“We knew that winning this was a big step to retaining the title”.

“I’m happy about how the team played, we played some great football, showed a lot of intensity and didn’t leave them any space to play in”.

“I swear I didn’t look for that yellow card”.

“It’s an important step, but there are still a lot of points to play for. I’d like to congratulate the team for the effort we put in against a very good side”.

“It was a difficult ground to win at, because Villarreal played well and had chances to win the game”.

“Now we have the Champions League and a hard tie, but this win will give us a lot of confidence”.