Abidal at the Camp Nou

Abidal at the Camp Nou

15 days after his operation, the French defender came to the club to visit his team mates and watch the training session in the stadium.

More info
After his operation on March 17 and being released from hospital a week ago, Éric Abidal returned to the Camp Nou for the first time today. He walked onto the pitch and greeted all his friends at this crucial time of the season. Everybody was delighted to see that he was his usual cheery self, and is recovering well. 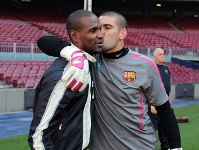 Abidal got to the Camp Nou shortly before they started training and there were hugs and kisses all round from the players, coaches and other members of staff. He walked onto the pitch shortly after the rest of the squad and made jokes with everybody before closely watching his colleagues train for the crunch game with Villarreal.

An image that says it all

Abidal’s appearance was a morale booster all round, and his team mates were visibly thrilled to have their friend back. When he saw him, Valdés immediately stopped the exercise he was doing and gave the Frenchman a huge hug and a long kiss that goes to show just how much affection the players feel for the man. Abidal has won everybody’s hearts. 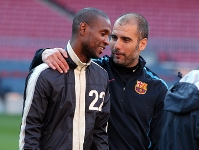 Abidal has been resting at home for a week. His post-operation progress has been good and today was his first public appearance since being released from hospital a week ago.