Barēa and Villarreal have similar football styles. They both seek to win in the same way and play the best combination football in La Liga.

Villarreal and Barēa can guarantee a good game. They both like to play the ball, hold onto possession and play in combination. Guardiola’s side is admired all around the world, but Saturday’s opposition deserve respect too for the wonderful football they have been producing since the great years under Manuel Pellegrini. Now under Garrido, it is not by chance that they are third in the table. The numbers speak for themselves. At El Madrigal we will be able to see how these two fine sides are coming on.

Barēa and Villarreal both like to keep possession for long periods of time and pass the ball around as a group. Barēa make more good passes than any other team in the league, with 692 a game. Madrid are second with 454 with Villarreal just behind on 415.

All that passing also produces results, and both sides also produce a large share of their goals from open play. 95% of Barēa’s goals this season have been scored that way, as have 32 of the 48 scored by Villarreal. 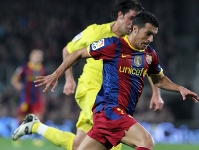 Crosses into the box

Barēa and Villarreal are also the two teams that make the least use of the option of sending crosses into the box. The yellows have only done this 438 times, and are last on the list, followed by Barcelona with just 545. These have led to 6 Barēa and 7 Villarreal goals. The team that uses this method te most is Athletic Bilbao. The Basques have made 903 crosses that have produced 20 goals.