Bojan back with squad

Bojan back with squad

The presence of Bojan Krkic on the training pitch with the rest of the squad was the big news at today’s training session. All Barça’s internationals are now back home and preparing for Saturday’s trip to Villarreal. 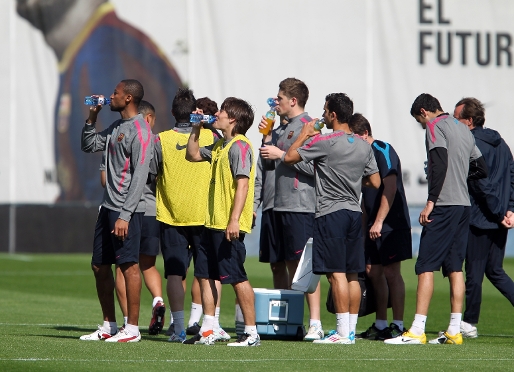 Training in the evening and press conference at lunchtime

The squad will return for training at 17.30 on Friday evening, when they will have a session behind closed doors at the Nou Camp focussed on Saturday’s game. Josep Guardiola’s pre-match press conference will be held at the Ciutat Esportiva Joan Gamper at 12.30.
Barça’s young number 9 missed training on Wednesday after coming back from the Spanish Under 21s game on Monday with a grade 1 sprain of his right ankle.

The last of Barça’s internationals to arrive from their countries’ games were the Argentineans Messi, Mascherano and Milito and whilst Leo went off for tests at hospital, his two countrymen also missed the session with the rest of the group, preferring to do some gym work. Abidal and Puyol were also absent.

Pedro and Maxwell warm up with the rest of the squad 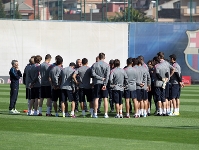 Pedro and Maxwell, who are still recovering from injury, again did some work with their teammates, warming up alongside them at the start of the session.

Xavi given a day off

Xavi, who is unavailable for the Villarreal game through suspension, was also missing from training after Guardiola gave him an extra day off to rest, whilst the B team youngsters Thiago, Montoya and Dos Santos joined the squad.