Alves is looking forward to April when Barça will be playing vital games to aid their search for trophies. He recognises the fact that his contract renewal is a dream come true and he feels highly rated at a club where being happy is more important t 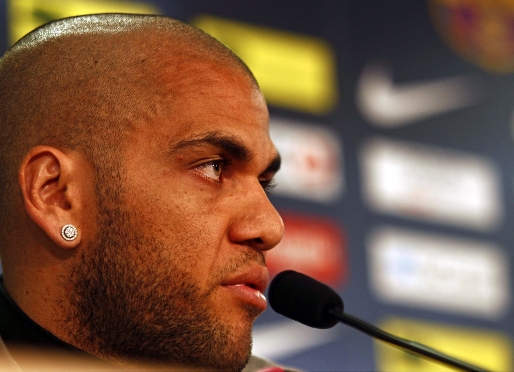 "I want to make my own history with Barça"

Alves hopes that someday he might carry the same weight within the club as Xavi or Puyol. To this end he’ll work hard to make history just like them at Barça: "I can’t compare myself with these players, as they have a long history in the club. I want to write my own history with Barça, Based on hard work I’ll fight to make people change their minds about Brazilian players who leave by the back door after only two or three years at the Club". Alves also said that he doesn’t see himself playing for Real Madrid when he finishes his time at Barça: "It would be disrespectful. Before that I’d return to Brazil, if that was the only option".
Dani Alves isn’t worried about the intense April ahead that the team is facing, starting on Saturday with the away game against Villarreal. On the contrary, he’s more motivated than ever. "It's amazing what awaits us. We are exactly where we wanted to be: alive in all competitions. Now is the time to enjoy it and think that it’s only a game and we might also lose. If that happens, we have to keep competing to the end, faithful to our philosophy” Alves said during the press conference before training on Wednesday.

"Mistakes can be costly" 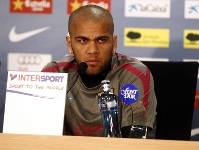 The Brazilian defender believes that it’s "very important that we win on Saturday away at Villarreal. A victory would be send out a message, and every mistake from now on could be costly". However, Alves believes that nothing will be decided as "a win would allow us to, at least, maintain the difference of 5 points over Madrid, nothing more".

"Not winning a trophy would be a disappointment"

The high standard exhibited by Barça all season, and their competitive spirit, have made Alves optimistic, and demanding, about the expectations of the team this season: "Not winning any trophy would be a big disappointment. For the way we’ve played, how we’ve competed, if we don’t win any of the three trophies we’re fighting for would be really disappointing. But I’m 100% confident about the team and if we carry on down this road, I’m sure we’ll achieve something very important". 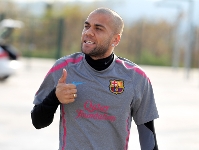 "There are things more important than money"

Regarding the details of his recent renovation with Barça, Alves confirmed what he had told Barça TV and www.fcbarcelona.cat : that the renewal was a dream come true: "I am very happy. Despite what was said at the time, the money issue wasn’t fundamental. There are more important things, such as feeling valued within the Club. My family is very happy in Barcelona and so am I".

Alves joked about the role played by his wife in the final decision: "Now I can go around saying that I’m in charge at home(laughing). It’s true that my wife has played a big part in the contract renewal, and the President recognised that fact, that’s why he thanked her".