A guarantee on and off the pitch

A guarantee on and off the pitch

José Manuel Pinto has shown what a safe pair of hands he has and has also contributed to the wonderful team spirit at Barça in recent years. His high point was the cup victory in 2009, and he has another in his sights in April. 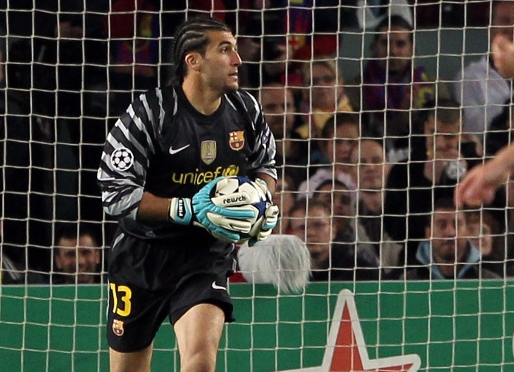 More info
In January, 2007/08 a serious injury to Albert Jorquera led the Barça coaches to opt for a new reserve goalkeeper to replace him. On January 18, José Manuel Pinto officially transferred to FC Barcelona originally on loan to the end of the season from Celta Vigo, where he had won the Zamora Trophy.

He was so hard working and dedicated to the cause that the club decided to offer him a full-time contract. The new coach was impressed with what he saw and fielded Pinto in the treble winning season in all of the Copa del Rey matches against Benidorm, Atlético Madrid, Espanyol and Mallorca, and then again in the final at Mestalla, where Barcelona beat Athletic Bilbao 4-1. 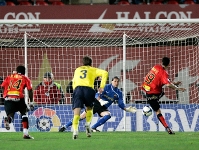 Barça fans will always remember him for ‘Pinto’s moment’ away to Mallorca in the semi final. With six minutes to go, and with FCB winning 1-0, Martín Cáceres was sent off and a penalty was awarded to the islanders. Balearic captain Josep Lluís Martí could have levelled the tie from the spot, but Pinto’s odd gestures to his opponent were seen around the world before he saved the penalty to send his club into their 25th cup final.

It is not only in cup matches that Pinto has shown his class and professionalism. This season, when Víctor Valdés was unfortunately injured, Pinto played in 3 league matches and 2 more in the Champions League. Barcelona won all five of those games and only conceded one goal. He has also appeared in eight cup matches, and Barça have only lost once and have always made it through the round. He’ll be back for the final against Madrid, as Pep Guardiola has already confirmed.

The club could not have asked for more from the man. He has played 31 official games in less than three years and has only leaked 24 goals.

As well as his brilliant performances, Pinto has also shown solid commitment to the club, the team and his team mates. He always puts the team first and shows this in every training session and every match. Valdés and Pinto, therefore, will be the Barcelona goalkeeping double act for at least one more season.