The Brazilian has won 15 major club and international titles in less than five years. But after extending his contract with Barēa to 2015, he says he just wants more. 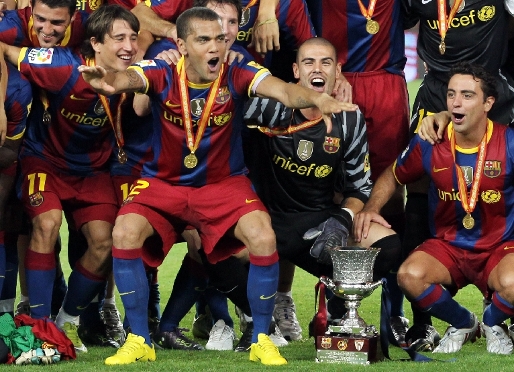 “I want much more success, and if I can, I want to retire here. I was born to win and this club shares my ideas” said Dani Alves, shortly after agreeing to stay at FC Barcelona until 2015. The Brazilian has grown used to success in recent years. 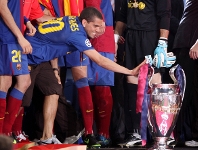 Alves arrived at Barēa just as Pep Guardiola’s glorious period on the bench was about to commence. In the first year, he won the Liga, Champions League and Copa del Rey treble, and a year after he added the two Supercups, the Clubs World Cup and another Liga, playing a starring role in all three. His eighth out of ten possible titles came this season in the Spanish Supercup, where he beat his former employers, Sevilla.

Wins start at the Pizjuįn

But he also tasted glory in Andalusia. Dani Alves joined Sevilla in 2002, aged just 19 years, and in six seasons there helped the side through its greatest period ever. They won back-to-back UEFA Cups, one Copa del Rey and one European Supercup, taking his honours at club level to 13.

Alves has also won two titles at international level. With Brazil he has played both as a full back and in midfield, where he helped win the Copa America in 2007 and the Confederations Cup in 2009. With the ‘canarinha’, all that Dani Alves is missing is the World Cup, although he was in the world-beating Under 20 team.