A priceless full back

A priceless full back

In little more than three seasons, Dani Alves has become a firm favourite with the fans. His dedication, quality and strength have won him a regular place in Josep Guardiola’s starting eleven, and he has made the right wing his domain. 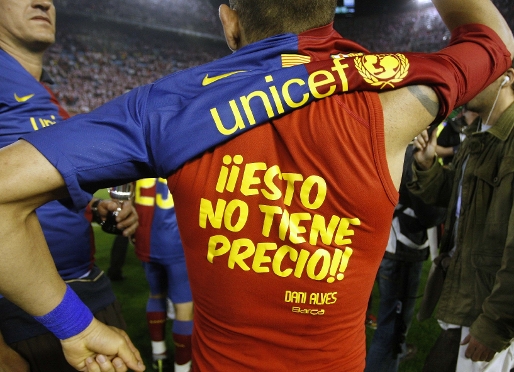 More info
There is no right back quite like Dani Alves anywhere in the world. He participates in team plays like no other, making daring runs up the wing to support attacks, even going as far as the opposition’s area, to extent that some people confuse him with a winger. But he is not. He is a full back, but one that has such an amazing physique that he can do much more than what is traditionally expected of a player in his position.

He came to Barcelona from Sevilla, where he was considered a hero, at the same time that Josep Guardiola was made first team manager. He soon adapted to the Barça style and formed a lethal understanding with Leo Messi, who he teamed up with on the right for a year and a half.

Alves became somebody Leo Messi relied on heavily, but so did Xavi as the team marched on towards the treble. The bad news that season was that Alves missed the Champions League final against Man United through suspension. But he remained one of the most used players under Guardiola that year, with 54 appearances.

He has gone on to feature in 141 games and continues to dominate the right hand side of Barça’s football machine. Now that Messi is playing in a more central position, Alves has really come into his own, and he even comes forward far enough to score. In three years, he has been on target 11 times, usually with long range efforts and unexpected runs in from behind. He is the all-round full back in the greatest of Brazilian traditions.

But aside from his wonderful displays on the pitch, he has also proven to be an exemplary professional. Dani Alves has always had an excellent relationship with the fans, which surely has much to do with being a Brazilian that has lived in Seville. There is always a smile on his face, and he celebrates his goals with a dance. Just the kind of happy man that football needs.