Spanish League Round Up Week 29

Spanish League Round Up Week 29

Whist Barça and Madrid amass their points haul at the top of the table, the teams below them continue to suffer from inconsistency, with Espanyol, Valencia, Bilbao and Atletico Madrid all losing again this weekend. 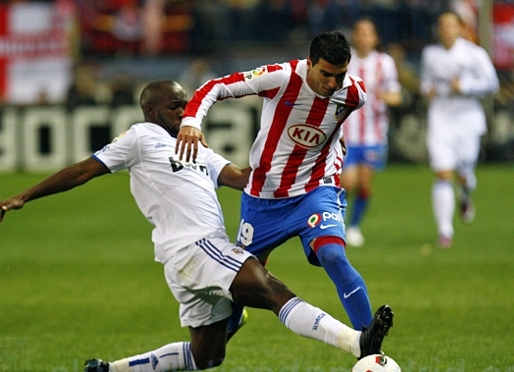 Esteban Vigo’s dismissal after his team’s heavy defeat on Sunday was the seventh sacking in La Liga so far this season, with Antonio Álvarez ( Seville)Ferreira (Málaga) Jose Aurelio Gay(Zaragoza), Juan Manel Lillo (Almería) Miguel Angel Portugal (Rácing) and José A. Camacho (Osasuna) all having got the chop since the start of the campaign.
Real Madrid stay five points behind Barça after beating Atletico 1-2 in the Madrid derby, but Valencia drop to fourth after losing at home to Seville, whilst Espanyol were beaten at Malaga and Bilbao lost at home to Villarreal, who move up to third. Hercules are now bottom of the table and managerless after Esteben Vigo was shown the door following their 0-4 thrashing by Osasauna and Deportivo and Zaragoza, who both lost, are only a defeat away from the drop zone. Getafe drop into the bottom eight following their defeat at the Nou Camp.

Cristiano Ronaldo out for up to three weeks

Real Madrid duly chalked up their fourth derby win of the season over Atletico, with Benzema again on target in the 1-2 victory, but they may pay a high price, as Cristiano Ronaldo suffered a muscle tear and will be out for between two and three weeks. Villarreal are now in third –a massive 24 points behind Barça- after they won at Bilbao thanks to a Marco Ruben goal and the win should guarantee Champions League football for next season, as they are now 11 points clear of fifth place Espanyol. Valencia dropped to fourth at the end of a miserable couple of weeks that have seen them go out of Europe and lose third spot. Their latest disappointment was a 0-1 defeat to Seville , with Ratikic on target for Manzano’s team.

Seville clambering up the table

Seville have won once, drawn once and lost once in their last three games , but such is the inconsistency of the teams around them that they are the “form” team in the fight for a UEFA spot and are now seventh, level with Bilbao and just a point adrift of Espanyol, who lost their fourth straight game on the road, going down 2-0 to Malaga.

Malaga off the bottom

That win for Malaga lifted them off the bottom and came courtesy of two goals from Rondon, who is the seventh highest scorer in the competition with 12 for the season. Below the Costa del Sol team are Almeria, who lost 1-0 at Sporting and Hercules who were thrashed 0-4 at home. Sporting’s win stretched their unbeaten home record to seven games and leaves them three points above the drop zone in 15th, whilst Almeria are four points off salvation with a tough looking run in that includes trips to the Nou Camp and the Santiago Bernabeu and visits from Bilbao, Villarreal, Valencia and Seville in the remaining nine games.

Hercules boss Esteban Vigo paid the price for his team’s miserable performance at home to Osasuna(0-4) and their awful record of losing 11 of their last 13 games. For Osasuna, it was just their second away win of the season, but their impressive form of late has taken them up to 10th, just four points behind Atletico Madrid – who they face in Pamplona in their next La Liga game. Llevant’s revival also continued with a 0-1 win at Riazor which leaves them on 35 points too and condemns Deportivo to another nervy end of season –the Galicians are in 16th on 31 points and face trips to fellow strugglers Malaga, Hercules and Sporting, as well as to the Nou Camp before the campaign finishes.
Below Deportivo are Zaragoza, who failed to build on last week’s win over Valencia and went down 1-0 to Mallorca, whilst Racing managed to give themselves some breathing space with a 2-1 win over Real Sociedad that takes them to 33 points –just three more than Zaragoza.