There were just six first team squad members in training this morning when they were joined by eight from Barça B for a session on pitch number 2 at the Ciutat Esportiva. 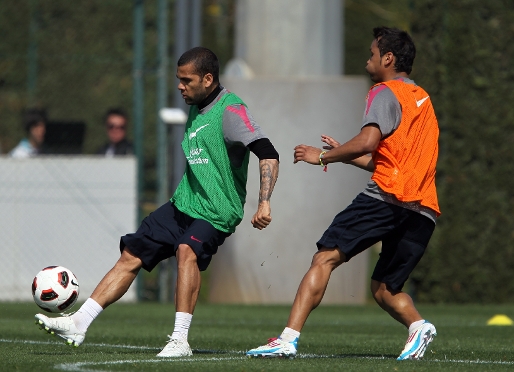 More info
The first of this week’s four training sessions was limited to the six first team squad players available - Pinto, Alves, Fontŕs, Keita, Jeffren and Bojan, who were joined by Mińo, Muniesa, Sergi Gómez, Montoya, Tello, Carmona, Rafinha and Víctor Vázquez from the B team under Pep Guardiola’s supervision.

Adriano, who started against Getafe, was in the gym, whilst Milito, Mascherano and Iniesta, who all had a day off ahead of joining their national teams on Tuesday, also came in for some light work.

For their part, Puyol, Pedro and Maxwell all worked on their recovery programmes on a day at the training ground when there was no press conference.