Xavi no jugarą a Vila-real

Xavi will miss the Villarreal match

The yellow card Xavi Hernandez was shown late in the game will prevent him from playing in the match at Villarreal in two weeks time. Here are other stats from the game with Getafe. 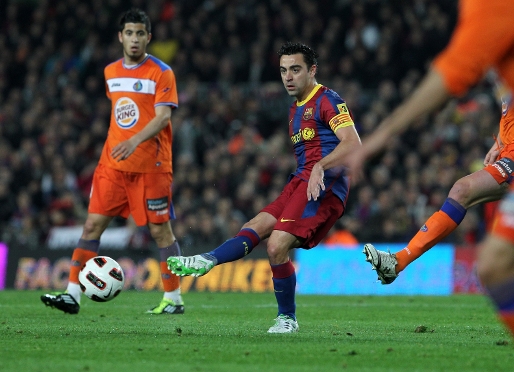 ► Of the five players who were one yellow card away from suspension before the match, Xavi was the only one to pick up his 5th card. Valdes, Mascherano, Messi, and Busquets, who didn’t play, are still one card from suspension.

► With the win against Getafe, the team has established a new record: 27 consecutive games without losing in the league, beating the record of the 1973/74 season (26).

► Valdés is also on the way to new records, having played 289 games in the league, overtaking Antoni Ramallets He’s the second goalie in the history of the club to have played more league games.

► Alves scored his third goal this season, his second in the league. Before the game he had scored against Panathinaikos (Champions League) and Sevilla (League).

► Bojan scored his fifth goal in the league, having scored previously against. Almeria (2), Real Sociedad, and Sevilla.

► Jeffren had minutes on the pitch once again. Injured until recently, he hadn’t played since Betis-Barēa (3-1) on 19th of January, in the Spanish Cup.

► Barēa, who don’t have another game until April, ended March with a balance of 4 wins and a draw.