VŪctor Valdťs has no special preferences for who BarÁa meet in the Champions League quarter finals to be drawn on Friday. He also expressed his optimism over Eric Abidal and believes he will win the biggest challenge of his career. 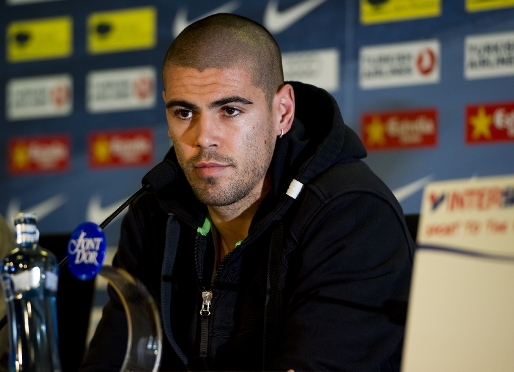 Valdťs had words of praise for Andreu Fontŗs, who has been drafted into the first team squad: “Fontŗs has more than shown his quality and his level. I personally remember his great game against Almeria. He doesn’t need to demonstrate anything as we all know him here at the Club from the games and the training sessions he has taken part in with us. The fans can rest easy”.
There are no small teams in the last eight of the European Cup and Victor Valdes knows that it really makes no difference who Barca are drawn against on Friday: “any team we play in the quarter finals will be tough. I’ve always said that if you want to win the Champions League you have to play against the best teams. That’s why I have no particular preference - I just want to get through and play the next opponents”.

Abidal will come through

The squad were clearly deeply affected by the news of Eric Abidal’s tumour, but the attitude that the French defender showed when he spoke to the players on Wednesday has also lifted them. Valdťs explained: “he’s the one who is clearest that he’s going to get through this. It was big blow for us all but seeing him so optimistic has convinced us all that he’ll get over it”.

Valdťs believes that their teammate’s problem could actually help the team’s motivation: “I don’t think it will affect us badly, as his optimism has lifted us all. We are motivated to offer all our success from now to the end of the season to him, though the biggest win will be the one he gets over this thing”.

VŪctor Valdťs also dismissed the unfounded allegations surrounding doping at the Club: “the team is really on the margin of all this controversy. People can think what they like, but nobody can doubt that this team reflects values that go beyond the merely sporting”.

BarÁa and Real Madrid go into the final stages of La Liga knowing that any slip up could prove vital and Valdťs stressed that every game from here on in is really important: “both of us have tough games ahead. We play Getafe on Saturday and it will be a hard game against a team who play football really well. Every game will be like a final now for us and for all the other teams with something to play for”.