Bojan’s goal against Seville was his first since the one he bagged against Real Sociedad three months ago on December 12th. The young Catalan came on as a sub for Pedro this Sunday and was once again on target. 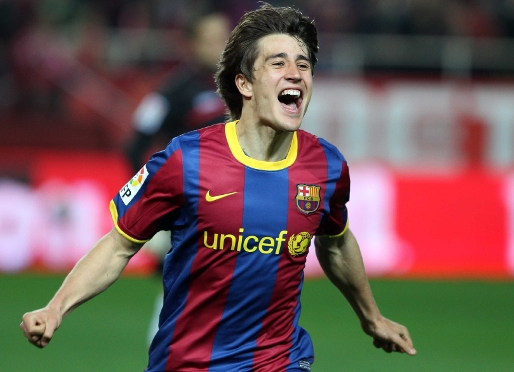 Bojan’s goal at the Sanchez Pijuan on Sunday came at a ground where he scored one of his most important goals last year when he scored Barça’s second in their 2-3 win in the penultimate game of the season.
Bojan Krkic scored his first goal of 2011 against Seville after coming on for Pedro who was forced off with a groin problem just before the quarter hour mark. The Barça number 9 looked lively throughout and was quick to take advantage of the first chance that presented itself to put the team one up.

It was a tough and physical game at the Sanchez Pijuan, but on the half hour Iniesta showed a touch of class with a through ball to Dani Alves, who crossed for Bojan to control and stroke home, despite the efforts of Martín Cáceres. The goal gave Barça what could be a vital point and will also have given the youngster a big confidence boost in a season where he’s had few chances to show his goal scoring instinct. Bojan is smiling again! 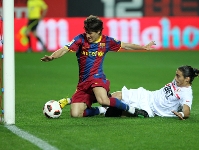 The goal was Bojan’s fourth of the league campaign so far this season and his fifth in all competitions when added to the one he scored against Ceuta in the Cup. His La Liga strikes have come against Almeria, where he scored twice in the 0-8 win and the fifth in the 5-0 victory over Real Sociedad. Sunday’s was thus the most important and decisive he’s scored so far this season.

Bojan has made 21 appearances so far this season, starting five games –against Hčrcules, Sporting de Gijón, Mallorca, Llevant and Zaragoza - with a total of 647 minutes on the pitch.