Messi’s fantastic opener against Arsenal has reopened the debate about which of his many goals is the best. Below we detail ten of the most important – you choose the best! 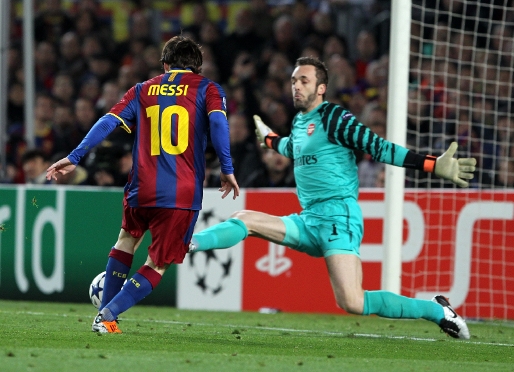 More info
1 May 2005. Barēa-Albacete (2-0). His first goal for the Club comes from a clever assist by Ronaldinho, as he chips the keeper and gives notice to the world that here is a star in the making.

10 March 2007. Barēa-Madrid (3-3). With the team a man down, and the game nearly lost, Messi skips through the Madrid defence to shoot past Casillas and ensure the draw and complete one of his first hat tricks for the team. 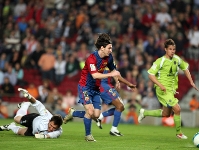 18 April 2007. Barēa-Getafe (5-2). An astonishing strike as the Argentinean picks up the ball in midfield and weaves his way past Paredes, Nacho, Alexis and Belenguer , before dribbling the keeper Luis Garcķa. Thirteen touches on a mazy run that made many ask –is this the new Maradona?

11 January 2009. Osasuna-Barēa (2-3). Through the Pamplona fog, Messi sends a last minute scorcher from outside the box to take the points. Pure power and pure precision.

1 February 2009. Racing-Barēa (1-2). After collecting a Racing clearance and controlling it with his chest, Messi fires in an unstoppable volley with his right foot - it’s a spectacular way to mark Barēa’s 5,000th La Liga goal.

27 May 2009. Barēa-Manchester United (2-0). His best headed goal and maybe his most important goal as he connects with Xavi’s cross to send a looping header over Van der Sar to confirm Barēa’s third European Cup title. 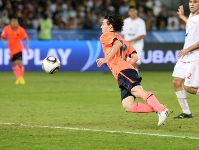 19 December 2009. Barēa-Estudiantes La Plata (2-1). With penalties approaching, Messi pops up to put Alves’ cross away off the Club badge on his chest to give Barēa their first World Club Cup.

21 March 2010. Zaragoza-Barēa (2-4). Near to the half way line, Messi takes the ball and dribbles past Gabi, Jarosik and Contini before beating the keeper Roberto with a well placed drive. Almost a carbon copy of the Getafe goal and part of yet another hat trick.

6 April 2010. Barēa-Arsenal (4-1). After Bendtner opens the scoring for Arsenal, Messi takes the game by the scruff of its neck and scores four goals to take the team into the semi finals. The first goal comes as he fires home an unstoppable shot from the edge of the box.

8 March 2011. Barēa-Arsenal (3-1). Messi delicately chips Almunia and volleys home before the ball hits the ground to make it 1-0 just before the break. His chip looked to have been a rebound at first sight, but it was in fact a beautiful piece of skill from the World Number One.