“Barēa lend a great dignity to our game”

France Football editor-in-chief Denis Chaumier is excited by the football Barēa are playing and explained: “even though Zidane is with Madrid, I’d be lying if I didn’t say most French hearts are with Barēa”. 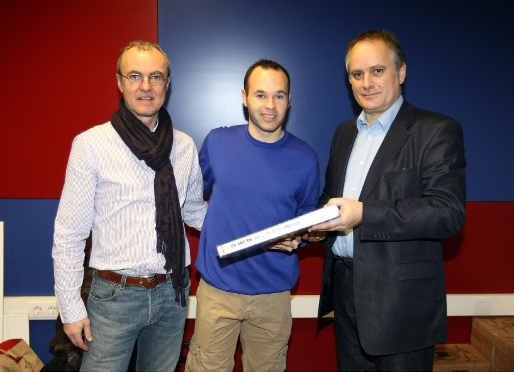 “Anything can happen in football”

The France Fotball editor enjoyed a great night at the Stadium on Tuesday with Barēa’s win over Arsenal and afterwards he reflected: “matches like Tuesday’s show that even when you dominate the game and create chances - even when you are ahead, anything can happen: with just a few minutes to play, Bendtner had the chance to score and that would have sent Barēa out. That would have been completely unfair to me, but it makes you realise that in football, anything can happen”.
Denis Chaumier, who declared himself a Barēa fan, was at the Ciutat Esportiva on Wednesday to present the Book of the 50 Years of the Ballon D’Or to the top three players in last year’s awards - Iniesta, Xavi and Messi. In an exclusive interview for Barca TV and www.fcbarcelona.cat, he explained: “Barēa have a big following in France. The fans always do whatever they can to get to see them. Many French hearts are with Barēa”.

“Barēa are an example for all clubs” 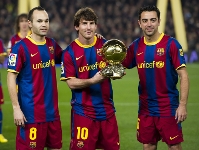 Chaumier enthused about Guardiola’s team, claiming: “that the three nominees for the Ballon D’Or were all from Barēa just shows what a great job the Club is doing and is a great challenge for the rest of football. Right now Barēa are an example for all clubs and they lend a great dignity to our game”. 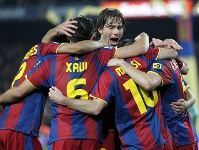 It’s not just Barēa’s results that are creating such an impression across the world, according to Chaumier: “the extraordinary thing about this team is the way they play. It’s hard to copy, because the standards in world football today are rather more concerned with physical strength, speed, ability to jump and so on, whilst Barēa are completely different. That is what has made this team such a captivating and pleasing sight for so many fans across the globe. Barēa have many advantages over their competition and I don’t think they can ever be copied”.

The hardest thing is always to stay at the top, more than to reach the heights, and that’s one more reason why Denis Chaumier admires Barēa: “the best thing about Barēa is that as well as offering fantastic football, they have been able to keep such a high level for so long. They never seem to tire of winning and that makes them almost invincible”.