"The fans will carry us into the quarter finals"

Guardiola: "The fans will carry us into the quarter finals"

Pep Guardiola knows that the role of the FC Barcelona fans in the game against Arsenal will be key to achieving the goal of reaching the quarterfinals and the manager insists that staying alive in the tournament is a "wonderful challenge." 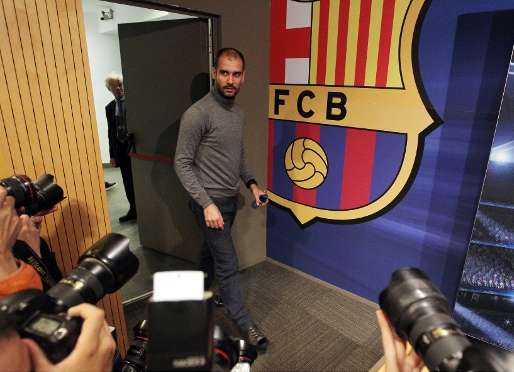 It’s almost 10 days since Pep Guardiola has spoken to the press. The last time was after the match in Mallorca, on the 26th of February. This Monday he appeared again after the doctors discharged him from hospital after he’d recovered from the discomfort caused by a herniated disc. "I'm better. Not good but better," Guardiola said, and only wanted to talk about the big game on Tuesday against Arsenal.

In the full to overflowing press conference the Barcelona manager spoke about the crucial Champions League match on Tuesday against Arsenal.. 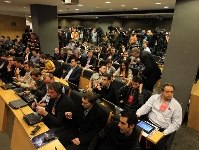 Pep Guardiola knows that Barça fans are there when needed, and so he’s in no doubt that on Tuesday at the Camp Nou, fans will respond and play a really active role in getting the team to the next round of the Champions League. "The fans will carry us to the quarterfinals," he said, calling for their contribution especially in the first fifteen minutes of the second half. "We cannot fail, it’s such a great challenge to be in the quarter finals."

With regard to Arsenal’s missing players, and doubts as to whether players like Van Persie, who has travelled with the team, will play, Guardiola only wishes that "all Arsenal’s star players will be there so we can witness a fantastic spectacle"

Moreover, Guardiola is not crying over the absence in defense of Puyol, injured, and Piqué, suspended The Barcelona manager recalled that in the final of the Cup and the Champions League two years ago Barcelona played with some players missing, and said: "If we don’t make it to the quarter finals it won’t be because Carles and Gerard are not there".

What type of game to expect? 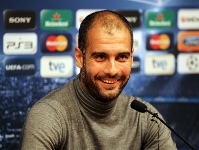 Guardiola expects a game in which "there will be very little space in the middle, we’ll have to attack with some order and be careful with their counter-attacks", but Pep is confident they’ll win and said that "do not doubt that we’ll try, we’ll play on the attack, to score goals. Do not be in any doubt that we'll go for them".

Furthermore, Guardiola defended Arsenal as a big team. "Their merit is that they’ve been up there for so long. The important thing is to be there and Arsenal are." The manager knows the importance of qualifying and that "the Champions League is special and is a great challenge…..it's a good thing to stay in the competition."