Plenty of safe options at the back

Plenty of safe options at the back

Barça will go into Tuesday’s last 16 second leg tie against Arsenal without their first choice centre half pairing of Piqué and Puyol. Captain has failed to come through his injury and Piqué is suspended, but Guardiola isn’t short of other options. 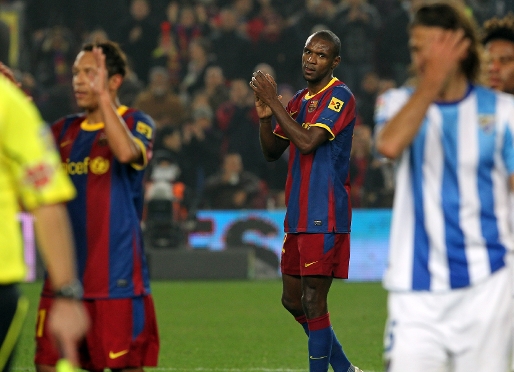 The two Barça B defenders Andreu Fontŕs and Marc Bartra are probably the least likely to get the nod, particularly since they have not been training with the first team squad of late. However, the two both have plenty of quality and have already shown this season that they are more than capable to make the step up into the first team.
Gerard Piqué’s yellow at the Emirates means he missed Tuesday’s game and Puyol’s attempts to get fit enough to play seem to have been in vain, but Guardiola can call on defenders of proven class in Abidal, Milito and Busquets, as well as the impressive B team pair Bartra and Fontŕs. 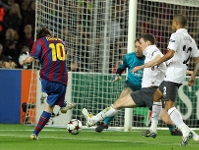 It’s not a new situation for Pep of course – he found himself in a similar position last year against the Gunners and opted to bring in Milito and Marquez for what turned out to be a stunning 4-1 win that sent the team through to the semis.

Éric Abidal has shown he can easily move into the heart of defence from his preferred position at full back and offer the same guarantees as a centre back as he always has done at left back. The French defender is undoubtedly a luxury candidate to resolve Guardiola’s defensive dilemma. 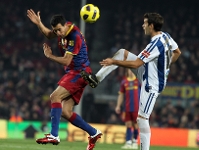 Busquets has already figured at centre half and shown himself to be as accomplished as he is in the middle. His height and his tackling make him a formidable obstacle for attackers and his ability to bring the ball out from the back is unquestioned – the perfect profile for a Barça central defender.

The Argentinean played the full 90 minutes against Zaragoza and looked to have put the physical problems that have dogged him at time this season well behind him. He looked to be back on good form and just as he did last year, Milito could offer Guardiola a safe and experienced option.