“Never easy against a packed defence”

Tito Vilanova was happy enough with Barça’s win over Zaragoza, especially given the visitors’ ultra conservative tactics, claiming: “it’s never easy when a team comes and closes down so much with a packed defence”. 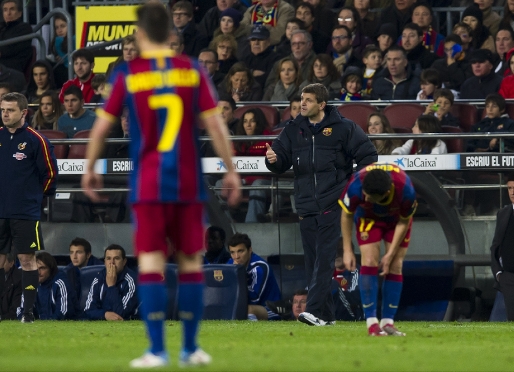 Quizzed about Carles Puyol’s fitness ahead of the Arsenal game, Vilanova explained: “he’s a lot better and we didn’t play him tonight more out of precaution than anything else… we’ll see how he is in training on Sunday and Monday”.
After praising the Zaragoza keeper’s performance, Vilanova explained the difficulties Barça had faced against a five man defence: “Doblas was very good and it is never easy to play against a team who pack their area with so many players”.

Vilanova recognised that one goal was never going to leave Barça in the comfort zone: “we were all looking for the second. We were never really relaxed and that’s not what we’ll be after against Arsenal either– you are always on edge at one up in case they get one back. We’ve done our job now though and whatever Madrid do on Sunday is their business”.

Pep Guardiola was on the touchline for the game, but his back injury meant it was his assistant who dealt with the post match press conference: “I hope he will be available on Tuesday against Arsenal, I thought he looked a lot better than against Valencia. We all know he has made a great effort and we are all very grateful to him for that. Let’s hope he continues to get better”.

Looking forward to Tuesday’s game, Vilanova stressed the importance of the match, in which Barça will have to pull back a 2-1 deficit from the first leg on London and explained: “I’m sure Arsenal won’t come here to defend and sit back on the draw”.

With one eye on that game, a number of regular first choice players were rested against Zaragoza, though once again Messi was out there playing a full part: “one day he’ll need a rest, but he feels good and he always wants to play. If we’d been winning by more in the second half we might have taken him off tonight”.