Valdés back in training

Valdés back in training

Barça goalkeeper Víctor Valdés has been declared fully fit and was back in action at this Friday evening’s training session. Puyol was also present for a session conducted by Tito Vilanova. 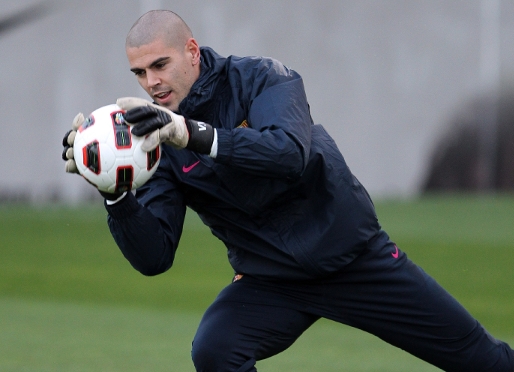 Barça will be back at work on Saturday morning at 11.30, behind closed doors in the Camp Nou, the same place where, later that day at 20.00, they will be playing Zaragoza.
After receiving treatment for almost two weeks on a knee injury, Víctor Valdés has been given the medical all-clear and was back with the squad on pitch number one at the Ciutat Esportiva Joan Gamper. The main focus of the session was Saturday’s league fixture with Real Zaragoza, the 17th of the campaign, and which kicks off at 20.00 in the Camp Nou.

Puyol back with squad 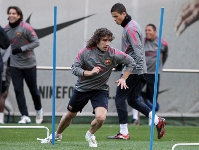 The 21 players in the session included the whole first team plus reserve keeper Rubén Mińo and also Carles Puyol, who has yet to receive medical clearance. On Thursday, he had worked in isolation from the main group, and only joined in with a few exercises towards the end, but today he was able to join his colleagues from start to finish.

For the second day running, it was Tito Vilanova who took the session, as Josep Guardiola is still recovering after being taken to hospital for treatment on a slipped disc.