Due to his back trouble, Josep Guardiola will not be on the bench against Zaragoza. But this will by no means be the first time that Barēa have had to get by without their manager. Johan Cruyff and Frank Rijkaard are two further examples. 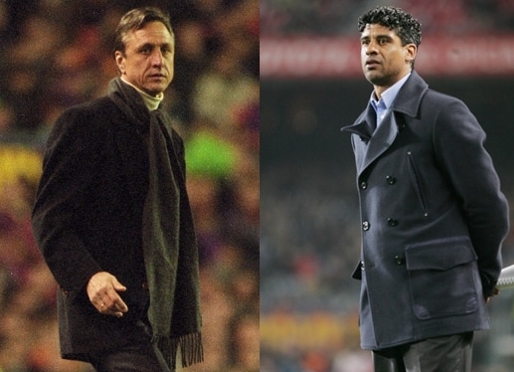 On February 27, 1991, the mastermind behind the Dream Team, Johan Cruyff, went into casualty at the Centre Quirśrgic Sant Jordi, Barcelona after suffering heart failure. He required surgery in the form of a double bypass in intensive care and spent 10 days in hospital. 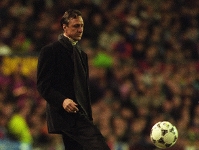 Carles Rexach took over the side, which was top of the league at the time and playing amazing football. The difficult circumstances had no negative effect on the way the team played, and of the six games without the Dutchman on the bench, Barēa won four, drew another and lost just one. Cruyff was back a month and a half later, on April 10, to watch his side win 3-1 in the Cup Winners Cup semi final first leg against Juventus, and a month later they were crowned league champions.

Rijkaard out with pneumonia

On December 3, 2005 el Barēa played at El Madrigal against Villarreal in the 15th match of the season without manager Frank Rijkaard nor Xavi Hernįndez. The Dutchman was suffering from pneumonia and was away for 10 days, while the midfielder had torn cruciate ligaments in his right knee, and was out for six months. 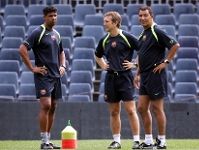 Rijkaard’s second in command, Henk Ten Cate, managed the side against Villarreal. Barēa won a good game 2-0 and went on to collect the league and Champions league double. Rijkaard was better in time for the following league match at the Camp Nou against Sevilla, and which the Catalans won 2-1. That was the game where Ronaldinho showed off the Ballon d’Or award he’d been given a few days earlier. That was Barēa’s eleventh win in a row, thus equalling the record that had stood since the 55/56 season.