Valdés: "Barēa’s fans have made me stronger"

Valdés: "Barēa’s fans have made me stronger"

Speaking sincerely on the Barēa TV program 'Estació Camp Nou', Victor Valdés acknowledged that the fans demands have made him "a stronger player in every sense." 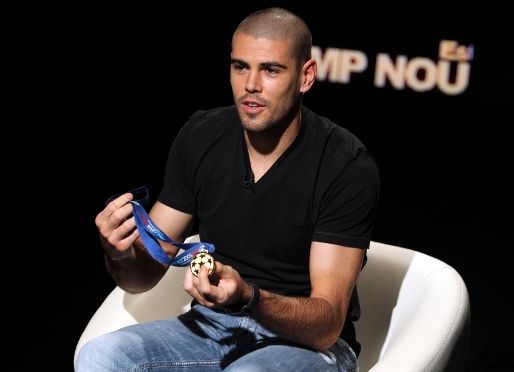 On April 20th, Valdés already knows that he’ll be on the bench for the Spanish Cup Final against Real Madrid, in Valencia. He did that two years ago at the same ground, against Athletic Bilbao. This time, however, he’ll suffer more: "Against Bilbao it was special because it was against a rival that I like a lot, but Against Madrid I’ll suffer a lot more. As always, I’ll try to help as much as I can from the bench, and I’m convinced that Pinto will do just fine. He has the team’s and the manager’s confidence. He deserves to be in goal and will do really well”.
Being the club’s goalkeeper is not easy, and it’s a position subject to a lot of criticism. At 29, Victor Valdes can speak from maturity and experience gained over the eight years he’s been connected to the first team. He’s had good times and bad, and above all in the 2005/06 season, with Frank Rijkaard in charge, Valdés had his worst moments between the posts: "Nobody likes to be whistled at, even less so on your own ground. The whistles were for things that I didn’t do well, and over the years you realize that it’s fairly normal. If I had to thank the fans for anything, who’ve been pretty demanding with me, is that they’ve helped me to become a stronger player in every sense. They’ve made me a better goalkeeper over the years due to the pressure they’ve put me under”.

Juan Carlos Unzue, former Barēa goalkeeping coach, taught him to learn from the criticism. With Unzue, he had to go over the mistakes: "The truth is that I didn’t really like doing it. I used to be a person who didn’t take criticism very well, but now I try to see the positive side".

Before and after Paris 2006 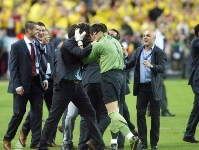 When he heard the whistles in the Camp Nou, however, he didn’t realise yet that that year would finish with his best night: Paris, 2006. "It was the perfect match, for me. There is a before and an after in my career following that night. There had been a lot of talk during the year. I’d taken a lot of stick, and I couldn’t have asked for a better end to the season. It was also a way to thank Frank for the confidence he’d shown in me”.

With Frank Rijkaard, Valdés almost had a father and son relationship, "Frank was like a father to me, and helped me a lot through difficult moments in my career. He was one of the few people that gave me confidence. He used to say ‘stay calm, I'm here for you’. I’ll be grateful to him for the rest of my life”.

With Guardiola “it’s like going to school every day" 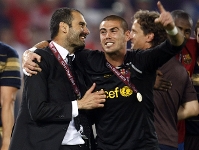 Valdés is now at his peak. He’s now the fourth goalie in the history of the Club who’s played more games in a Barēa shirt, and has three best goalkeeper trophies, only beaten by the legendary Ramallets. Despite his experience, the Barēa keeper is learning every day, especially now under Pep Guardiola: "From the time he arrived, the first concept we worked on was playing the ball out of defence with the central defenders going wide. This had an impact on me. I’ve learned a lot, and consider him a football maestro, and he’s taught me to live the game differently, learning more all the time. It's like going to school every day! I’m learning day to day with him”.

Valdez goes onto the field looking serious, concentrated, and chewing gum. He takes his place between the posts and doesn’t miss anything going on in the game. But off the field, is it different? "In my case, I’ve created an image which is not really me. When you get to know me, it all changes. I’m a fairly quiet person, a family man, loyal to the people I trust, and there aren’t many of them. I’m a hard worker, disciplined, and a bit cranky”. 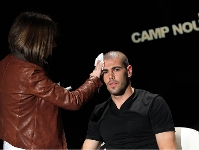 This is a small part of Victor Valdes, but there’s still a lot to discover. What were Victor’s early years in the Academy like? When and why was he about to give up his career as a goalkeeper? Where are his gloves from Paris? What advice would he give to future goalkeepers? The answers to all these questions can be found on the program 'Estació Camp Nou' on Barēa TV, which premieres this Friday at 23.00. The interview will also be broadcast on Sunday at 17.00.and 23.40.