Barca captain Carles Puyol trained with the group towards the end of the Thursday training session, the main absentee being the manager Josep Guardiola, in hospital for treatment on a herniated disc. 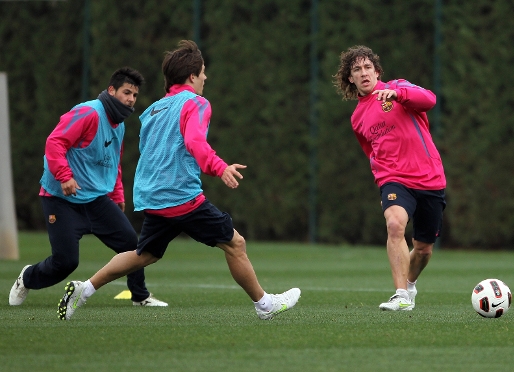 The team will train again this Friday. The session will begin at 18.00. Following that, a member of the coaching staff will attend a press conference.
25 players took part in the 1st team session at the Joan Gamper training ground on Thursday, amongst them Carles Puyol, who, despite working away from the group in the first part of the session, joined his teammates towards the end for the first time since being injured in late January.

The session, basically recovery work after Wednesday's league match in Valencia (won 0-1 ), helped the Barca players to leave that game behind and focus on the next match against Zaragoza in the Camp Nou (Saturday at 20.00).

Josep Guardiola was the session’s main absentee as, due to the back pain he’s been suffering with for two weeks, he was admitted to hospital in Barcelona last night, being finally diagnosed with a herniated disc . Tito Vilanova, his assistant manager, was responsible for leading the session. 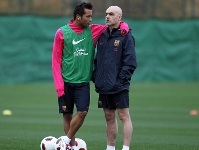 Recovery in the gym

José Manuel Pinto, Iniesta, Abidal, Adriano and Piqué, all five starters against Valencia, did not train with the group, and did some recovery work in the gym. Victor Valdes is still recovering from injury.