Xavi and Jeffren train with the group

Xavi and Jeffren train with the group

Barça returned to training this Monday to begin preparation Wednesday’s game in Valencia, as injured players, Xavier and Jeffren, worked with the rest of the group. The training kit now features the name of the Qatar Foundation. 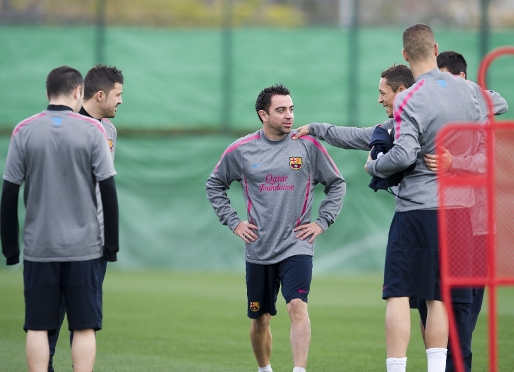 Qatar Foundation on the training kit

In the training session which took place this Monday, the first team players wore new training gear that now includes the name of Qatar Foundation. There are two different shirt models, and today they chose to wear the grey one with pink lettering.
Josep Guardiola’s team is now fully focused on preparation for the next league match to be played this Wednesday in Valencia. With the win over Mallorca under the belt and having rested for a day, although on Sunday there was some training activity, the squad exercised for the first time this week at the Joan Gamper training ground. 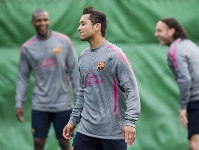 Undoubtedly, the most important news of the day was the presence of the players who had been injured, Xavi and Jeffren, working out with the rest of their teammates. Xavi had already done some work at the training ground yesterday. For their part, Puyol and Valdes continued recovery work on their respective injuries.

20 players on the pitch 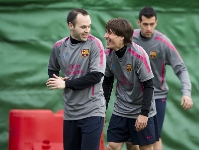 The Barcelona manager had 18 first team players on the training pitch. On this occasion, Guardiola opted for Mińo and Nolito, from the B Team, to complete the group for a session that was open to the media during the first quarter of an hour.

The next training session will be tomorrow, Tuesday, at 11.00, at the Joan Gamper training ground. Following the session, Josep Guardiola will give a press conference prior to the match against Valencia.