Guardiola: “We are who we are and I’m sure we’ll respond”

Pep Guardiola has full faith in the players in the FC Barcelona squad and doesn’t think it will matter that five of them are out for the game in Mallorca on Saturday. 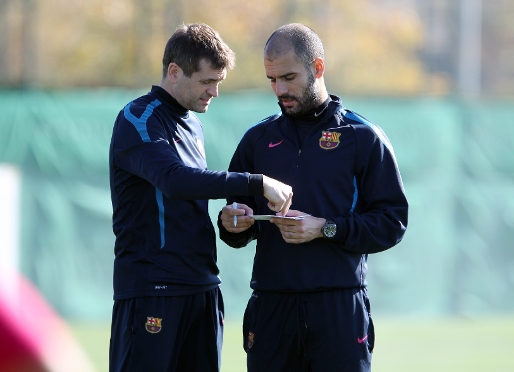 Sunday will be a special day at the Palau Blaugrana, because after the handball game between Barça Borges and Chámbery, there will be a homage to the man who played in goal for Barça for more than 20 years, David Barrufet. “The tribute and withdrawal of his shirt is more than deserved. He has generated admiration, not just among colleagues but also opponents, his is a wonderful legacy”, said Pep Guardiola. He has not forgotten that Barrufet was a key member of the Dream Team that won so many titles under Valero Rivera. “As a Barça man I’d like to thank him for everything he has done for us over the years” said the soccer manager
The Barça manager know that titles are won by the full squads and not just a handful of individuals. So although FC Barcelona are going to Mallorca without any of Valdés, Puyol, Jeffren, Xavi or Alves, Guardiola is not losing any sleep. “We are going to Mallorca with the players we have, and I think I have a lot more faith than other people do … we are who we are and I am confident that they’ll respond”. 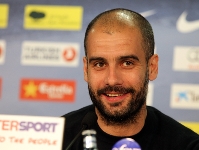 On Wednesday, Xavi told a press conference that injuries are just part of football, and Pep Guardiola echoed those sentiments on Friday. “Over a year we always get these situations. It is not just something that’s happened this year”. He said that as soon as he knew he was missing these players against Mallorca “I just took them out of my head and replaced them with others.”

The dangers of Mallorca

He also spoke about how hard it is to play Mallorca, especially on the road. “It’s always a tough game. They are a team that is good enough to play in Europe when they are home. They are very strong at home”.

Unless there are late changes, José Manuel Pinto should be back in goal on Saturday. Guardiola is delighted with what his reserve keeper is doing, saying “the ways he plays on the pitch is because of what he does off it. He is an impeccable professional. He trains to play and accepts the role he’s given”. 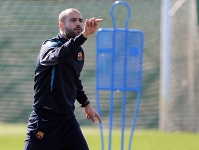 Playing for the Champions League

Pep Guardiola prudently commented that the season does not depend on the next 15 days. “That’s not the feeling I get” he said, but did accept that “we are playing for the Champions League.” Following some surprise results in the first leg matches, Guardiola said that “these go to show me how much our own players are worth”. He knows just how much work goes into qualifying a team for the semi finals or the final, and that this year “the challenge is once again to get into the quarter finals”.

There are some tough away trips ahead, including forthcoming visits to Valencia and Sevilla, and the manager commented that “there are still 12 games to go, that’s a lot of points!” But Guardiola disagreed that this will be the toughest part of the fixture list, saying that “the hardest period is November, December and January”.

Guardiola also wished all the best to youth player Barça Jon Toral, who is leaving for Arsenal at the end of the season. “He has every right to go” he said. “I wish him luck.”