Lionel Messi gave his first ever TV interview in November 2003, to Barca TV, when he was a Youth Team player and the great success he was to achieve was still ahead of him.

“I like to do my talking on the pitch”

Have you changed a lot over these four years?

“It was a bit uncomfortable at the start, because my teammates were fine, but I lacked confidence. It was hard because I got to the dressing room and went in, but I never spoke. It was tough, but I built up my confidence with everybody and it all started to go fine”.

Argentineans are famous for talking a lot, but you are a quiet guy, aren’t you?

“That’s what everyone says, yes….. But when I get on the pitch I can forget everything and that’s where I do my talking. I always try and enjoy myself in a game, but sometimes things don’t work out and I get angry”.

Are you more nervous here in front of the cameras than you would be if you had to turn out for the first team against Real Madrid?

“The truth is that I am more nervous here than on the pitch -there I can go out and play and forget about everything else”.
The 16-year-old Messi had just signed his first professional contract and assured viewers that he wanted to stay at the Club “forever” whilst expressing his excitement at the prospect of playing for Barça B and also train with the first team.

Below is the full text of that interview, which will be broadcast on Barça TV at 23.00 next Thursday.

Are you happy with the season you are having? 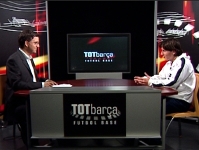 “Very happy. With God’s help, things worked out really well last season and this year that’s continuing - I hope it doesn’t change before the end of the season”.

How did the signing of your contract come about?

“A week before, they called me up and told me they were making me a professional and I had to sign the papers – I was so happy”.

What was it like to have a professional contract at just 16?

“You don’t normally get into the first team squad until you are 18 or 19 here, but in Argentina there plenty of 16 or 17 year olds in the First Division because there is less money and clubs need to use their youngsters”.

Last year, Cesc went to Arsenal and there have been plenty of people who worried you might leave too.

“Well, I’m fine here at Barça and I want to stay here forever”

This contract should help you settle and concentrate on playing, shouldn’t it?

“I’m here to play and enjoy myself – little by little everything will come right”.

This is your fourth season at the Club, but it’s not always been easy for you has it?

“I had a hard time the first season, because I couldn’t play at the start, I was six months out because I didn’t have the right papers. Then when I got them I got injured in the first game and I was another two months out. The following season I started over again and everything went well”.

They say you can juggle just as well with an orange as with a ball!

“Yes, I like doing that. In Argentina I did it with ranges, tennis balls ….. 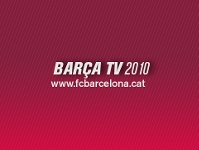 Have you been a footballer since the cradle?

“Yes, I started when I was 3 - we are a family of footballers, my brother, my cousins …. I started and I just loved it”.

You could always talk football with your Dad couldn’t you?

And all the family are fans of Newell’s Old Boys?

“All except one, the middle brother Matias, who supports Rosario Central.”

That must have caused a few arguments at home!

“Well, yes, to begin with nobody liked that, but then we got over it”

Would you say you most enjoyed playing when you were in the Cadet A team? 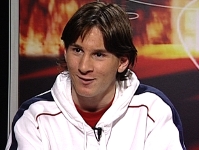 “Yes, I didn’t play much in the Cadet B team, only the last 6 games, though they were fine. I was able to express myself better in the A team I was more confident with my team mates. The fact is we had a great team – we only lost one league game”.

You normally play just behind the strikers, don’t you?

“That’s where I most like to play. I like to be just in front of midfield and see plenty of the ball”.

Have you always played there? Would you prefer to be out on the wing?

“I haven’t played on the wing at all this season and I do prefer playing behind the strikers, but I’ll play wherever I have to. I played as a winger sometimes last season, but I didn’t really enjoy it a lot”.

You get a lot of goals – how many did you score last season?

You also make a lot of goals, if we added all of them together that would be a lot wouldn’t it?

“I like scoring goals and making chances for my teammates . I just do the best for the team . If I see another player is in a better position I’ll give it to him and if not, I’ll try and score myself.

You started out this season with the Youth B team, but that lasted for just one week. 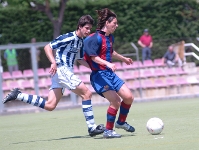 “Yes, I started with the Youth B team, but I didn’t get to play a game for them”.

“I’d like to get into the reserves without going through the C team.”

Do you see yourself as able to replace Ronaldinho if he gets injured?