The first team returned to training on Wednesday to prepare for the next league game of the season, on Saturday in Mallorca. Due to missing players, Guardiola called up Mińo, Montoya and Thiago for the session. 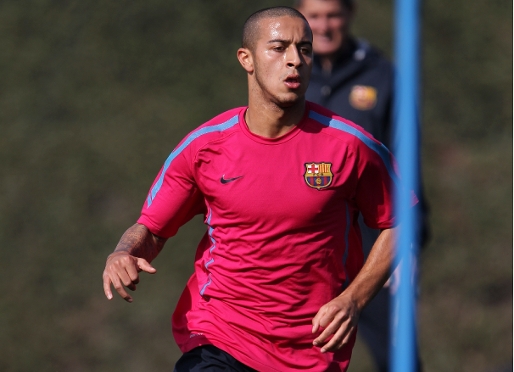 The players will train again tomorrow, Thursday, in a session scheduled for 11 a.m. at the training ground.
After two days rest, Barça are now fully focused on the preparation of Saturday's game against Mallorca, their 25th of the league season and the first of four games that Barça will face in the next eleven days, with Valencia, Zaragoza and Arsenal to come. 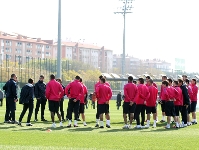 The entire first team squad participated in the session at the training ground with the exception of the injured Jeffren, who did some individual ball work with a fitness coach, and Puyol, Xavi, and Valdés, who spent the time in the gym doing recovery work on their respective injuries.

In Xavi’s case, it was announced on Tuesday that he would be out for 7 to 10 days owing to a small muscle strain in his left calf.

Messi in the gym 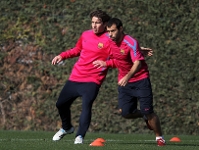 Lionel Messi was not at training ground either, but instead stayed in the gym doing specific exercises.

Guardiola opted to call up three players from Barça B, goalkeeper Rubén Mińo, right-back Martín Montoya (remember that Dani Alves can’t play in Mallorca due to suspension) and Thiago Alcantara.