Barca goalkeeper Jose Manuel Pinto was pleased with his own performance against Athletic and happy to have made a contribution in the win against the Basque team. 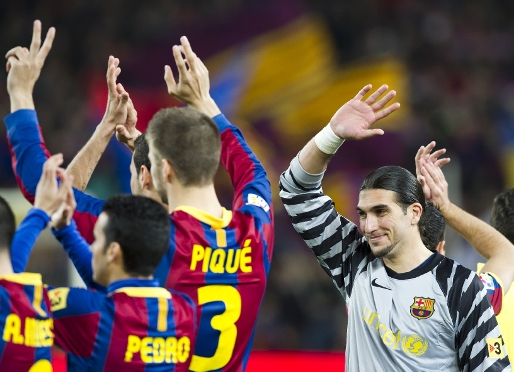 Next training session on Wednesday

The team has been given two days off, and won’t return to the training ground until Wednesday. The session will be open to the media for the first 15 minutes, and will be carried out at at the Joan Gamper training ground, starting at 11a.m. Following training, Xavi HernŠndez will speak to the press.
Josť Manuel Pinto stepped in as goalkeeper for the match with Bilbao due to Victor Valdes’ late injury. The player was pretty happy with the win and with the fact that "the three points stayed at home." His save from Llorente lifted the crowd, who have been right behind him, particularly in the last two games. According to Pinto, "it’s great to feel appreciated."

"If my performance helped the team to win, I am doubly happy," Pinto said just after the end of the game. The match ended in a 2-1 win thanks to goals from Villa and Messi, the latter in the final minutes of the second half, a goal that, according to the goalkeeper, was "fantastic.". With regards to his save from Llorente, the keeper explained: "He scores some good goals and I was a bit lucky in this match. I was well positioned and was able to react in time."

Available when the coach needs him 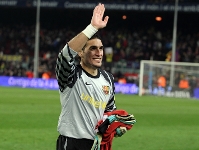 "I will always be ready when the boss needs me, I'll be at 100%," Pinto said about his first team place in recent game. The keeper said, however, that he’s just enjoying every minute of being part of this team. "They're all real stars, I enjoy watching each game and being involved in training ...". For Pinto, staying at a decent level at any time shouldn’t seem strange: "We’re all prepared for when the boss needs us, and this year I’m getting more chances to play."

Although Pinto is the regular keeper in the Spanish Cup, Victor Valdes has started in every league game until today Valdes knee injury gave Pinto his chance and he may have to carry on for the next few games. On Valdťs’s state of mind, Pinto finally said: "He’s fine, he’s got some minor problems with his knee, but he’s in great spirit".


What the other players who attended the press said:

"We couldn’t afford another slip up."

"We won an important game and it’s another source of happiness for the fans [his 250 official games in a BarÁa shirt]."

"We know they defend very tightly. We’re pretty happy with the win "

"In the end we got the reward of the second goal, and the win”

"We played with great intensity and the three points are vital."

"[About Madrid] we just have to keep playing our game. The 3 points are the most important thing."

"You have to be ready to play in any position."

"We had to work hard for the win. The fans gave us great support, and lifted us, as always." 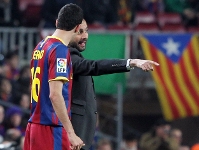 "I felt okay as central defender, a bit different from all the other games."

"The team is just looking ahead. We don’t think of anything except the 3 points."

"We have a good lead [over Madrid]. When they came here they were one point behind, now it’s five points."

"They were very tight at the back. If we’d scored another goal in the first half we’d have suffered less."

"Today is one of those days when we’re even happier with the win."

"It was a very intense game, and we had to work really hard. It's what we have to do, it’s our job to work hard… it’s always tough even if it doesn’t seem like it. If we play like this in every game, we’ll be fine".

"You always try to do things well. When the match is like this one you have to give a bit more, not just me but everybody playing at the top of his game. It’s the only way to win a game like this."