Barēa will only have to equal their results at the Nou Camp in the Group stage of this year’s Champions League in order to get through the tie against Arsenal. 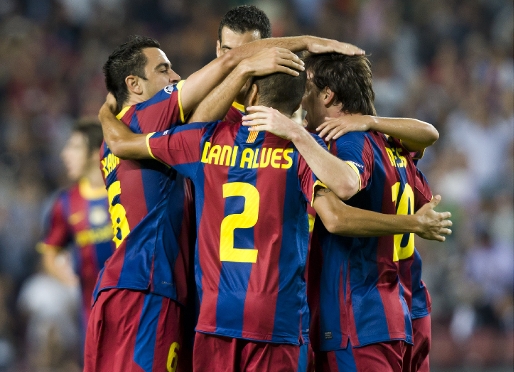 11 of the 15 results Guardiola’s team have achieved in the UCL at the Nou Camp would be enough to see the team through if they were repeated against Arsenal:

2010/11
FCB-Panathinaikos 5-1
FCB-Copenhagen 2-0
FCB-Rubin 2-0
There can be no doubts about this team, who’ve earned all the credit they will ever need over the last three great seasons and one defeat can’t set them back.

Barēa have a job on their hands to turn round the result from London, that’s true, but Wenger, Cesc and co know what Guardiola’s team can do at home and the memories of last year’s thrashing must still be fresh in their minds. 90 minutes at the Nou Camp can seem like an eternity when you are on the receiving end of one of Barēa’s exhibitions and trying to hold onto a result.

If Barēa can simply repeat the results they achieved in the Group stages against Panathinaikos, Copenhagen and Rubin, they will go through.

The Greek team came to the Nou Camp just after Barēa had suffered an unexpected defeat to Hercules and they were on the receiving end of Barēa’s injured pride. Guardiola’s team ran out 5-1 winners as Messi, Villa, Pedro and Alves got the goals. 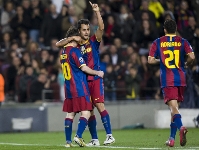 In game three of the Group, Barēa saw off Copenhagen with two goals from Messi to take top spot.

With qualification ensured, Guardiola gave some of his fringe players a run out against Rubin and Fontąs, Bartra and Vķctor Vįzquez showed that the Club has real depth in talent, with Fontąs and Vķctor Vįzquez ensuring a 2-0 win.