Despite losing in London, the FC Barcelona players have not given up hope. They feel that at the Camp Nou in front of their own fans, they’ll be able to turn the tie around. 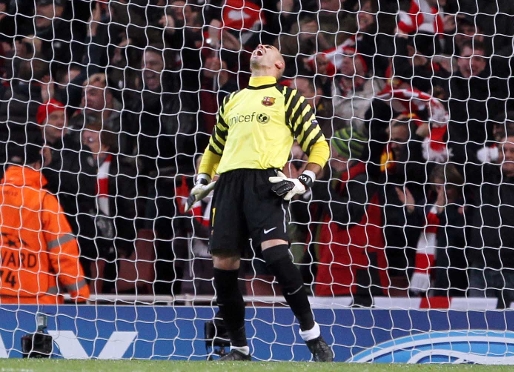 The squad will return to Barcelona tonight. They have a day off on Thursday and won’t train again until Friday at 11.00 am in the Ciutat Esportiva. Afterwards, Maxwell will be speaking to the press.

Keita and Adriano were the two players selected for the UEFA doping test after the match.
The Barça squad know it won’t be easy on March 8, but are still optimistic about their chances of making the last eight of the Champions League.

The following are some of their comments made after the game.

"It was an unfair defeat because we were much better than Arsenal".

"Those counter attacks do a lot of damage".

"If you watch the game you’ll realise it was a totally unfair defeat".

"We played good football. They were very effective in front of goal and we weren’t. You pay for that in Europe”.

"We’re very optimistic. We’re playing at the Camp Nou, with our fans. But the result was not one we wanted or that reflects the game”.

"They’re a very good side. They caught us twice on the counter and caused a us a lot of damage”.

"We were much better but they caused a lot of damage on the counter attack”.

"We didn’t deserve this result”.

"1-0 was a narrow lead given the chances we had. But Arsenal are a great side and took their moments”.

"These are lessons you learn. Arsenal never stop and were very intense”.

"We played a very good game. We had it under control until the 80th minute”.

"We are in the right condition to turn the game around at home”.

"We get the feeling that the referee let us down. But that’s no excuse. We have the kind of team that can deal with these things being against us”.

"I’m always optimistic. We’ll be in an ideal situation once our fans are behind us”.

"It was a very intense game. They caused us a lot of damage on the counter attack”.

"We could have got a better result”.

"We are confident that it will all work out for us”.

"We have to be positive. There is still the second game to play. In the first half we played a great game for the spectators”.

"We’re fine. There is no need for alarm bells. This is Europe and it’s hard to win games. In the end we’re coming away in a bittersweet mood”.