Barça flew to London this afternoon, where they will be facing Arsenal on Wednesday night in the Champions League second round. 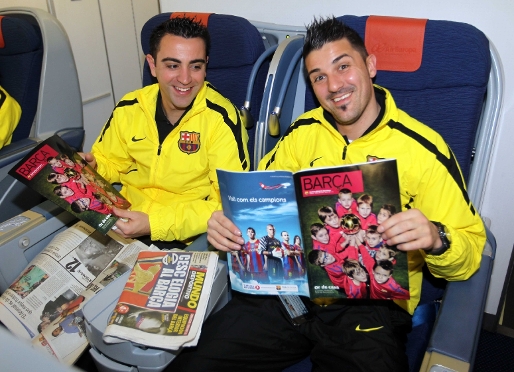 More info
The team is in London. Their plane left Barcelona on schedule at 16.00 and landed in Luton at seven in the evening, local time. All 18 of the fit first team players travelled, along with Thiago. Although the sky was cloudy, the temperature of 8 degrees is surprisingly mild for this time of year in the English capital. 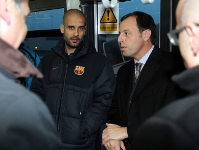 The party was led by president Sandro Rosell, along with vice presidents Carles Vilarrubí and Javier Faus and directors Jordi Mestre, Joan Bladé and Ramon Cierco, director general Antoni Rossich, UEFA delegates Amador Bernabéu and David Bellver and director of sport Andoni Zubizarreta. This evening they will enjoying an official supper with the directors of the host team in the Diamond Club at the Emirates Stadium.

Off to the hotel

The Barça players were transferred directly to Hotel Landmark, although Pep Guardiola and Andrés Iniesta travelled first to the Emirates Stadium to give a press conference. Barça have opted not to train in the Arsenal stadium this evening, and instead worked out this morning at the Ciutat Esportiva Joan Gamper.

The first leg of the Champions league clash kicks off on Wednesday evening at 20.45 (CET).