All 18 plus Thiago heading for London

All 18 plus Thiago heading for London

Pep Guardiola is taking all of the fit first team players he has to London for the first leg of the Champions League encounter with Arsenal. Thiago is also picked, but Puyol and Jeffren are out through injury. 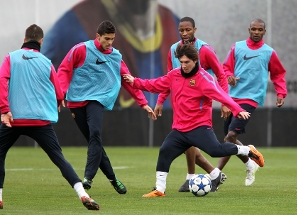 The players in the FC Barcelona party for the game with Arsenal are: Valdés, Pinto, Adriano, Alves, Piqué, Maxwell, Milito, Abidal, Sergio Busquets, Xavi, Iniesta, Keita, Messi, Bojan, Afellay, Pedro, Villa, Mascherano and Thiago.
In an unusual move, although the game is in London, Pep Guardiola decided that the pre-game training session would take place at home, with the first quarter of an hour open to the media. So on Tuesday the first team trained as usual on pitch number one at the Ciutat Esportiva.

All 18 of the available first team players were present, while the injured Carles Puyol and Jeffren Suárez were elsewhere as they continue their recovery programmes. 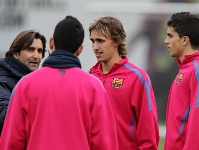 This was basically the squad that will be travelling to the English capital later today, but they were joined by Barça B’s Thiago Alcántara, who is also in Tuesday’s squad, and for the second half of the session by other reserves in Marc Muniesa, Víctor Vázquez and Marc Bartra.

Once the session had concluded, the Barça squad had lunch at the Ciutat Esportiva Joan Gamper before going off to catch their flight to London, which leaves at 4.00 pm and touches down at 5.50 pm, local time. The players will then be transferred to their hotel, although Pep Guardiola and Andrés Iniesta will first be going to the Emirates Stadium for the pre-match press conferences at 7.50 pm (local time).