Spanish League Round Up Week 23

Spanish League Round Up Week 23

With Villarreal, Espanyol and Bilbao losing, it was a good weekend for Valencia, whose 1-2 win against Atletico Madrid lifted them to third - 9 points ahead of 5th placed Bilbao. At the other end, Osasuna sacked coach Camacho. 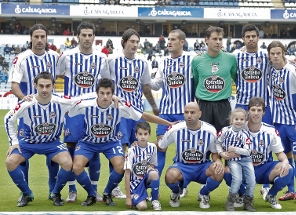 David Villa’s goal against Sporting meant that he was the only one of La Liga’s top five scorers to score this weekend, with Messi, Cristiano Ronaldo and Fernando Llorente all drawing a blank and Rossi missing Villarreal’s game with a stomach bug. Indeed of the top ten scorers, only Villa, Almeria’s Caicedo and David Trezeguet managed to score this weekend. Villa is the league’s third leading scorer with 15, behind Messi and Ronaldo.
Real Madrid’s 0-1 win against Espanyol means they are now 5 points behind Barēa, but they will be without iconic captain Iker Casillas for at least one week, after he saw red early on at Cornella. Valencia’s win moves them to third after Villarreal lost 1-0 against Deportivo. Llevant move out of the bottom three after beating Almeria, whilst Osasuna lost to Real Sociedad, dropped into the relegation places and on Monday sacked boss Jose Antonio Camacho.

Despite going one up through an early Reyes strike, Atletico Madrid went down 1-2 to Valencia, with Joaquim getting both goals for Emery’s team, who’ve now gone 9 league games without defeat and are third on 47 points. For Atletico, the defeat surely spells an end to any chance of a top four finish, as they are now 11th, a full 15 points behind fourth placed Villarreal, who suffered their second 1-0 defeat on the run when Deportivo saw them off at the Riazor. Bilbao missed the chance to close the gap on Villarreal when Barēa’s next two La Liga opponents met in Mallorca. A first half strike from Webo was enough to give Laudrup’s team the points that keep them in the hunt for a UEFA spot, whilst Bilbao, who lost their first game in six, are seven points adrift of the Champions League spots.

Espanyol lost their third game on the trot and their second on the run at home, when Real Madrid overcame the handicap of losing keeper and captain Iker Casillas to a first minute red card to win 0-1 thanks to a Marcello goal. Espanyol stay in sixth spot and with the sides below them also failing to make progress, they retain a six point cushion over the seventh placed team. That that team is Getafe says much for the lack of consistency from the teams challenging for the UEFA spots. Michel’s team let a two goal lead slip to bottom side Malaga and have now taken just five points in the seven games since Christmas. Seville, Mallorca and Real Sociedad are level on 31 points with Getafe after Manzano’s team lost to Racing to make it one win in five and Real beat Osasuna 1-0 to make it three wins and four defeats in 2011.

That defeat for Osasuna meant the end for Jose Antonio Camacho, who finds himself out of a job just a fortnight after being feted for the win over Real Madrid. Osasuna’s new boss Jose Luis Mendilibar will have to pull his new team out of the drop zone after Llevant managed to clamber out with a 1-0 win over Almeria and leave the Basques in 18th on 22 points. That was Llevant’s third win on the trot and they are now up in 15th spot with 24 points, whilst Almeria stay next to bottom, now just a point ahead of Malaga on 20. Zaragoza are just a point ahead of Osasuna in 17th, after late goals from Farinos and Trezeguet wiped out the visitors’ lead to give Hercules three valuable points. Hercules are now 12th, level on 25 points with Deportivo and Racing