Pedro Rodriguez talked about the resumption of the Champions League at Arsenal and the recent draw at Sporting. The winger sees the team “in good shape”, and expects to continue “along the same lines”. 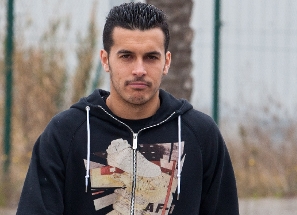 Pedro Rodriguez defined as "providential" the announcement of the renewal of Pep Guardiola’s contract. He said, "it’s great news because he’s a fantastic coach who’s doing a really good job."
The Champions League is back on Wednesday, and Pedro Rodriguez, who appeared at the press conference today, warned about Arsenal, the opposition in the last 16. "They're a great team and very difficult opposition with very good players, especially up front" he said. The Canary islander believes that the current form of Cesc and Van Persie will make it "a very difficult tie, different from last year as maybe they are more dangerous." 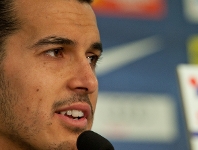 Pedro foresees a "pretty open" game at the Emirates, as Arsenal “play very well and allow the opposition to play”. At the same time, he’s certain how Barēa will play. "We're going out to win the game. Getting a decent result in the first leg is always good and we hope to do that and finish it off at home." The striker emphasized that the game is "really important" and he’s convinced that the team will play "focused and at our usual level."

Moreover, Pedro Rodriguez was very cool following the fact that Madrid reduced the margin to five points at the top of the League. "We are calm, we know the lead can change, as there are lots of games left. We’re still the leaders and we just have to keep playing as we are," he said. "We knew the league was still tough with a seven point lead. It’s still the same. We’ve both got difficult games right up to the end of the season." According to him, "we must always maintain our level of play, we know there won’t be any easy games." 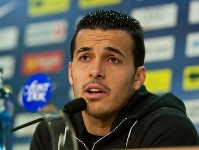 After the run of sixteen consecutive wins in the league came to an end with the draw at Sporting, he wished to point out that: "What we do seems easy but it’s not." Along these lines Pedro emphasised the great job done by their latest opponent. "Sporting worked really hard, went a goal up, and defended very well. It wasn’t easy to get back into it." Despite the setback, Pedro is confident that it won’t affect the team. "I don’t know if it’s a warning, but what I do know is that the team is fine and we must carry on playing as we are."