Josep Guardiola’s team trained this morning in preparation for the first leg of the Champions League last 16 knock-out round. The 2 injured players, Carles Puyol and Jeffren, trained separately from the main group. 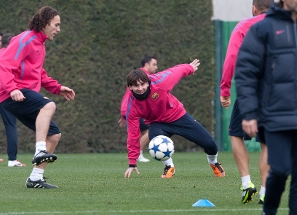 Next training set for Tuesday

Barça’s next first team training session is at 12.00 on Tuesday, at the Joan Gamper training facility. The session will be open to the media during the first fifteen minutes and will be the last session there prior to the match on Wednesday..

After the session, at 16.00 the team will travel to London. The planned arrival at Luton airport is scheduled for 17.50 (Catalan time). At 19.45 (Catalan time), Josep Guardiola, and a player yet to be confirmed, will appear at a press conference at the Emirates Stadium.
28 players trained today under the guidance of Guardiola at Barcelona’s training facility, 20 from the first team and 8 from the reserves.

In Monday’s session, the team began to prepare for the important game on Wednesday (20.45) at Arsenal, the first leg of the second phase of the Champions League. Guardiola worked with all 18 players available from the first team squad, plus 8 from the B team (Armando, Benja, Saul, Tello, Abraham, Muniesa, Ilie and Victor Vazquez).

Puyol and Jeffren on the training pitch 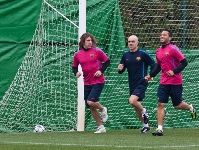 Carles Puyol and Jeffren Suarez, both injured, worked for the first time on the pitch, but they trained separately from the main group, with the recovery coach Juanjo Brau.

Monday’s training, open to the media for the first fifteen minutes, was carried out under a light rain, and began with the usual ball drills.