The two points dropped in Gijon on Saturday night seem to confirm that February is always something of a tricky month for Guardiola’s Barēa. Below we look at the stats that support that, as well as more facts and figures from the game. 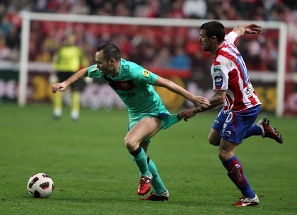 The draw put an end to two excellent records: 16 successive La Liga victories and 10 away wins on the run – both La Liga records.
► February can indeed be the cruellest month for this Barēa team, with Saturday night’s draw against Sporting following on from last year’s single league defeat away to Atletico Madrid (14th February) and the three game run without a win against Betis, Espanyol and Atletico Madrid in the same month two seasons ago. On both occasions, of course, the team went on to take the title and in both cases carried on unbeaten until the title was theirs.

► The draw in Gijon could easily have been a Barēa win – Guardiola’s men had six shots against Sporting’s single, successful, effort.

► Valdés conceded his first away goal since the visit to Cornella in December.

► The yellow cards handed to Valdés and Mascherano were their fourths of the season and they are both now just a card away from suspension.

► Valdés and Iniesta continue to be the only players to have started every league game.

► The absences of Busquets (on the bench) and Puyol (injured) means that they both maintain their personal records of 22 and 21 wins on the trot respectively.

► It’s been four months since Barēa have had to come from behind in a league game: that was on October 16th when they overturned a Valencia lead to win 2-1 at the Camp Nou.