Davids: “This Barça is the best in the world”

Davids: “If you look in the dictionary to see how to play, Barça’s name appears”

Former FCB man Edgar Davids was at the Ciutat Esportiva today and spoke to Barça TV and fcbarcelona.cat. He was full of praise for Guardiola and his team, which he feels is the best in the world. 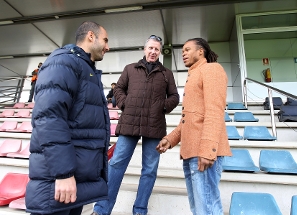 His time at Barça

Edgar Davids has fond memories of the time he was on loan at FC Barcelona, when he joined a side that was struggling and ended the 2003/04 season in second place. “I have fantastic memories. It was a memorable time in my life and I was pleased to get the chance to come to Barça and help the team. It was the best praise I could have got, because when I played for FC Barcelona, nobody wanted to come here, but I came”.

Davids played a total of 20 official matches for FC Barcelona, 18 in the league and 2 in the cup. The results were good while he was here: 13 wins, 4 draws and 3 defeats.
Davids played for FC Barcelona in the second half of the 2003/04 season, and is amazed by the way his former club is playing. “If you look in the dictionary to see how to play, Barça’s name appears” he said.

The man who played in his iconic glasses explained why he had come to Barcelona and the Ciutat Esportiva: “I have come to see some old friends and I also have a clothes shop for children aged 6 to 12 and the head offices are here in Barcelona. And I also wanted to visit Michael [Reiziger] and my old club”. 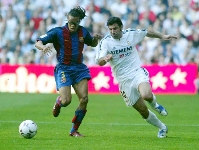 So, Davids popped by to watch the first team train. “I asked Pep if I could come by and see how they do things. I’m very interested in learning things about football and how they teach young children in academies and make them such good players. It is always a pleasure to see how they coach at Barça”, he said, explaining that one of his plans is to coach youngsters.

The Dutchman also spoke about his compatriot Ibrahim Afellay, FC Barcelona’s latest signing. “I think that if he’s patient and learns the Catalan mentality and culture, and the Barça style, then he’ll do very well here”.