“The three competitions will be decided”

Valdés: “The three competitions will be decided”

Víctor Valdés believes the really important part of the season is only just starting, when the three big competitions will be decided. He was also pleased to learn of Guardiola’s renewed contract and believes Pinto deserves to play in the cup final.

As for the alleged interest of Real Madrid in singing Cesc Fŕbregas, Víctor Valdés is sceptical. “From what I can tell, what he wants to do is come back home one day, and that means Barça. He is the perfect player for our style and I think we all want him to come back. And he’s a great kid. I can’t imagine him playing for Real Madrid”.
“The most important stage of the season is starting. Over the next few weeks we’ll be playing for three titles and we’re really looking forward to it” said Víctor Valdés. And it all starts this coming Saturday. “Sporting have always been very difficult opponents for us and they’re getting their form back, especially at home. I hope we can win and continue not having to rely on other results”. 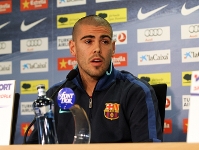 Valdés learned of Guardiola’s extended contract while he was away on international duty. He commented that “I can’t imagine Barça without Guardiola. I think I can speak for most of my colleagues when I say I expected him to renew. Barça should always have the best manager and he is the best”.

The news has come at a great time for the team because “people are only speaking about football”. And Valdés also spoke about the things he has learned from Guardiola. “Mainly tactical things, to be a more patient and steady goalkeeper. And in terms of the squad, to stay motivated and keep improving”. 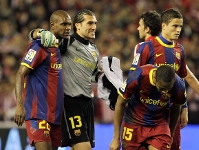 Barça have only conceded 11 goals in the league this season, the best record of any club in the main European championships. Valdés was asked if he could explain why the team is so solid at the back. “I am feeling fine in both the sporting and personal senses. The defence is on great form, but one of the keys to doing well in defence is creating pressure behind the forwards. The key to our defensive system is that we are first line of offensive pressure”.

“Pinto deserves to play in the cup final”

Valdés doesn’t think there is any debate: Pinto should be the first choice keeper for the Copa del Rey final. “We won the 2009, final with him and he has worked hard all year. He deserves to play the final too. You have to be fair in football, and our manager is fair. Pinto deserves to play in the final”.