The morning after Pep Guardiola renewed his contract with FC Barcelona until 2012, the man of the moment was at the Ciutat Esportiva to oversee training along with Luis Enrique and also record a promotional film for the Foundation.

Hugs, greetings and congratulations were the order of the day as the Barça manager until 2012 was the main attraction on Wednesday morning. The renewal of his contract is the best news that any Barcelona fan could have wished to hear.

Most of the squad were not there to be with Guardiola because of the international schedule this week, but those that were made a point of congratulating him.

From staff to reserves 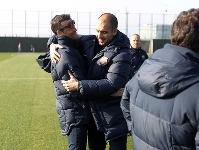 All his players, the coaching staff and the youngsters from Barça B congratulated the Catalan on extending his managerial ties with FC Barcelona. The session was held on pitch number 2 at the Ciutat Esportiva, where his friend and colleague Luis Enrique welcomed him with a warm hug. The two were deep in conversation for the entire session as they observed the different players in action.

Commitment to Foundation and ACNUR 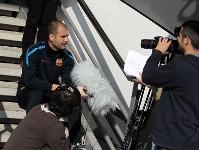 Once the session had concluded, he then recorded a video for Barça TV promoted by the FC Barcelona Foundation and ACNUR to benefit refugees. Still in his tracksuit, Guardiola moved to pitch number 1, surrounded by cameras and microphones to record an advert that will be revealed in a few day’s time.

Showing his typically calm professionalism, he followed the directors’ orders. Guardiola already knows how the media world works, for just a few days ago he appeared in an advert for Barça TV along with Luis Enrique and Carles Rexach that encourages supporters to watch the reserves in action at the Miniestadi. 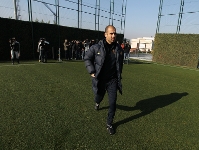