Two and a half years of excellence

Two and a half years of excellence

Pep Guardiola’s time at Barça has been marked by some amazing football displays, constant triumphs and a flood of titles. He is the man who has managed Barça to so many records.

The Barça of the Six Cups, the 99-point League and the recent 5-0 win over Madrid cannot be understood without considering the man behind it all, Pep Guardiola. He took over the reigns of the first team in 2008 after two trophy-less years. But he had a clear intention. For Barça to stay loyal to the same style he grew to know as a player here (1991-2001). Two and half seasons later and the world watches in awe as Barça play some of the most exquisite football ever seen and pick up title after title.

Eight out of ten 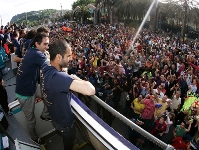 His first season at the club could not have possibly been better. After winning the Copa del Rey at a memorable final in Mestalla, the league tile was as good as settled with an incredible 6-2 win at the Bernabéu and there was still the Champions League conquest in Rome to come.

Guardiola’s side extended the legend in 2009 by winning both the Spanish and European Super Cups and the club’s first ever Clubs World Cup. The Barça of the Six Cups was born, and although the following season they failed to regain the Champions League or Copa del Rey, they did win the league again, and in even more spectacular style than the first time.

This year, Pep Guardiola and his side are continuing to destroy records. Having won another Super Cup, they have gone a record seventeen games without dropping a point to go seven points clear at the top of the table, and have already made it into the Cup Final and the last sixteen on the Champions League. It is also 28 league games since Barça lost a game. 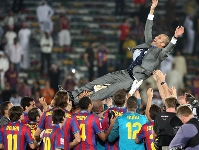 In his two and half years at the helm, Guardiola has become the manager who has overseen the eighth largest number of games in club history. He has been on the bench for 159 matches, and nobody comes close to the figures he has achieved in that time. He has won 117 games (73.5%), while there have also been 28 draws and just 14 defeats.