Pep Guardiola knows how unpredictable games against the mattress-makers can be. ōThey are games with no clear favourites. One of the biggest teams in Spain is coming and there are many reasons why they can winö.

Barńa v Atletico Madrid. These games always raise expectations and have a history of producing plenty of action and plenty of goals. “We have to make sure we play well”, said Pep Guardiola. “There are no clear favourites in these games. You never know what might happen … They have incredible players”. 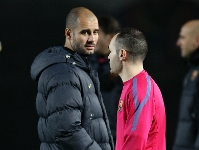 Quique Sßnchez Flores’ side was knocked out of the Copa del Rey in the quarter final by Real Madrid and are having an irregular season, having only won 4 of the last 15 points in play, and are now seventh with 30 points. “They have not won their recent matches, but they are still as dangerous … History tells us that these are special games, and I’m convinced we’ll be facing the best version of Atletico Madrid”. Guardiola is not being sidetracked by thoughts of breaking the record for consecutive wins. “We just have to go out there and play the ball around and create lots of chances. If we think about the record winning steak, it’ll make the game harder for us”.

Barńa have achieved their first goal of the season and will be in the cup final on April 20 against Real Madrid. Guardiola understands such optimism but feels “this will go down as the final approaches. Madrid deserve the utmost respect. They are the toughest and most difficult team you can meet on the pitch. We need to get rid of these exaggerated ideas … When you beat a team once, the next game is twice as hard, and it’ll be even tougher just after playing Madrid at home”. 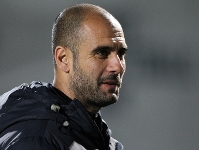 There has been a lot of talk about the potential cup final venue, but Guardiola made it clear that “I don’t want to play the final at the Bernabķu. That would make them more favourites than us. Madrid are very strong at home and would have an advantage. Although we have won all our away games, I still prefer to play at home. But it’s down to the RFEF to decide”.

The cup final is generating expectation, but there are big Liga and Champions League games to come before that. “We cannot be sure that we’ll be playing as well as we are now in two months time. That’s too far away”, said Guardiola. “First we have to go to Mestalla, to Mallorca, to Villarreal. I’m not thinking about Madrid. We’ll talk about then when the time comes”. 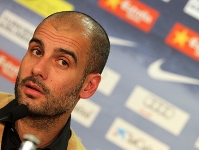 On Puyol and Bojan

Guardiola was asked about the captain’s condition. “There are no time limits. He’s making progress. When things get better, we’ll see how things are developing”. And as for Bojan, he said “we need him a lot this year and over the coming years”.