The 3-0 cup semi final win at Almeria saw goals from three of the few players who had yet to open their goalscoring accounts this term, namely Adriano, Thiago and Afellay. That means that 22 players have now found the net this season.

The record until now was that of 1995/96, when Johan Cruyff and Carles Rexach were in charge. Twenty players scored that season in the League, UEFA Cup and Copa del Rey.

In the 2010/11 season, all of the outfield players have scored apart from Javier Mascherano. The list even includes four players from the B team (Fontŕs, Thiago, Nolito and Víctor Vázquez), and not forgetting Zlatan Ibrahimovic, who scored in the Spanish Super Cup before being transferred to Italy. 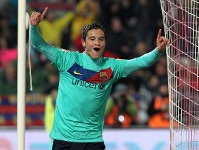 Since Pep Gurdiola took over the management of the first team in 2008, 28 different players have scored for Barça. Messi (122) and Pedro (42) top the ranking.