“There are important games before the final”

Mascherano: “There are important games before the final”

Speaking in a press conference this lunchtime, Javier Mascherano stressed the importance of not losing focus on the work that needs doing before April’s Cup Final, with important La Liga and Champions League games to be played.

The Argentinean midfielder made it clear that: “there’re still two months to go to the final. We’re very happy, but there are important games to play before then, starting with the game against Atletico Madrid this Saturday”. Although he admitted that the possibility of a game against Madrid is clearly an exciting prospect: “it’s motivation enough to play in the Cup Final, who we play magnifies the occasion for the fans and the press and everybody is talking about it, but we can’t think about that if we want to make sure we don’t have problems in the other competitions”. 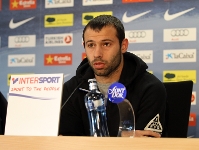 Mascherano was adamant that the game on Saturday has to be the main focus for the players and doesn’t think that Atletico Madrid’s poor run of late makes them any less of a threat: “big teams, and Atletico are a big team, are more dangerous when they are hurt. They have a great team with great players and they came into the season after winning the UEFA Cup and the European Super Cup against the World Club Cup champions. We mustn’t underestimate them at all because they are bound to put in a good game against us”.

“Madrid will fight all the way”

Barça have set themselves the challenge of maintaining the 7 point gap between themselves and Real Madrid at the top of the table, and Mascherano insisted: “the most important thing is to keep that distance, not worry about making it bigger. Real Madrid will keep fighting until the end and we have to keep winning games and getting better all the time to keep that distance”.

Not worried about lack of goals 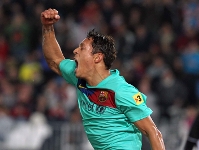 With Adriano and Afellay’s goals against Almeria, there are now 22 different players who have scored for the team so far this season and 20 from the first team squad, with only Mascherano yet to score, but the Argentinean isn’t letting that bother him: “the important thing is that 22 players have scored. That’s not normal, it’s never been seen before in another team It’s a sign of what this side are capable of. The lads sometimes rib me about not scoring and we have a laugh, but I wasn’t signed to score goals, but rather to do other things”. 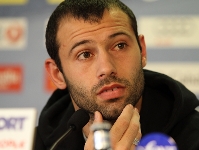 Mascherano and Sergio Busquets are competing for the same position in the team, but that hasn’t stopped them from building up a great relationship, as Mascherano explained: “it’s hard not to get on with Sergio. He’s a great guy. My experience tells me that the best thing is to compete and also to be together in a healthy way. I can learn a lot from Busi, as he was trained here at the club and is very clear about what concepts have to dominate the midfield at this club”.