January has often proved a difficult month for FC Barcelona, but not so in 2011. They won all 15 points in the league and got through two rounds of the cup and are in touching distance of the final.

Barça have played a massive nine official matches in January. The draw at the Camp Nou against Mallorca seems a long time ago now, and many sports papers have started describing Pep Guardiola’s team as simply unbeatable. 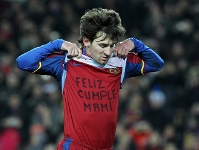 Not only have they won all 5 league games since the New Year, but they have done that playing wonderful football and demonstrating extraordinary superiority over their rivals. Barça scored 16 goals in January, averaging more than 3 a game, and have only conceded two, curiously both at the Camp Nou. Barça won two games at home (Levante, Malaga and Racing) and two on the road (La Coruńa and Alicante).

5 points ahead of Madrid 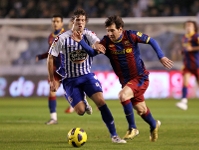 As Barça march dominantly forward, their closest rivals have been slipping away. Real Madrid won 10 of the 15 possible points, while Villarreal had a slightly better month, accumulating 12 points to consolidate their third position and move closer to the all-whites in the table. But Barça are now a healthy 7 points clear of Mourinho’s side, and 13 ahead of the side coached by Garrido.

Two and a half rounds of the cup

Barça have also done the job and more in the Copa del Rey. Of the four games played this month, the first was the trickiest. After drawing 0-0 at home to Bilbao before Christmas, they had to go to San Mamés and get a result. 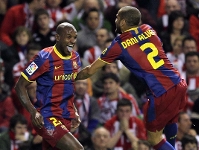 They faced a tough atmosphere in the Basque Country, where Caparrós’ team once again proved awkward opposition. Éric Abidal put Barça ahead with his first goal for the club since arriving in July 2007, but a late equaliser from the home side meant a tight finish at the Cathedral, with FCB eventually hanging on to qualify by virtue of the away goals rule.

Against Betis, Barça as good as settled the tie in the first leg as they flew to a 5-0 win against the second division leaders. That game also served as a tribute to the Barça trio that swept the board at the Ballon d’Or ceremony, Messi, Xavi and Iniesta. That game was followed by an inconsequential defeat in Seville. The five goals at the Camp Nou had already done enough to put the Catalans well in command.

Finally, against Almeria, Barcelona generated an identical situation to their quarter final by winning 5-0. Tonight they play the second leg, and the second Copa del Rey final of the Guardiola era is looking very likely indeed. 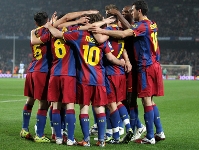 Results and scorers in January