The big game between Madrid and Barša in the Bernabeu is just seven matches away. However, Bojan does not believe it will be decisive: ôItĺll be an important match but not decisive"

Bojan Krkic told a press conference after the win against Malaga: “Obviously the match in the Bernabeu will be very important but in football any team can surprise you, especially in the Spanish league. For that reason we have to take all the opponents into account”.

“We suffered a dip in form but we recovered” 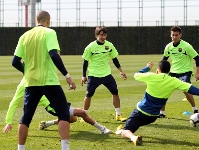 The last gasp win against Malaga has given the team more strength and confidence. For Bojan, unity in the squad is essential ahead of the tough test to come: “We’re completely united and if we keep on helping each other as we have up to now I’m convinced that we’ll overcome all adversities we might meet from here until the end of the season”.

“Pep’s praise is a prize” 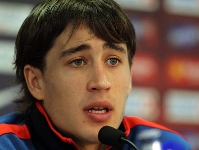 After the match against Racing Santander, and not for the first time this season, Guardiola heaped praise on Bojan in the press conference: “When Guardiola speaks well of me and says that I’m an important player, that’s a prize for me. That’s what encourages me to carry on working to gain a place in the team and take full advantage of every minute I get”. 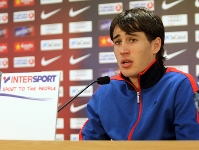 The importance of teamwork

Before the Malaga game, Pep Guardiola showed the players a TV documentary about the rescue of mountaineer I˝aki Ochoa. Bojan told reporters that the manager’s intention was to inspire teamwork among his players: “This kind of thing is great because it shows us the importance of working all together to achieve success”.