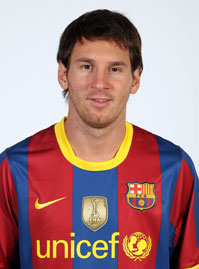 Leo Messi, with two Ballon d'Or awards to his name (2009 and 2010), is the best player in the world. This modest Argentinian has speed, dribbling and shooting skills. But despite so many individual virtues, he is also a remarkable team player.

How far can Leo Messi go? He was the league’s top scorer in the 2009-10 season and equalled Ronaldo’s historic total of 34 goals (96-97). He scored the goal against Estudiantes de La Plata that gave Barça the Club’s first World Club Cup.

But without settling for that, the Argentinian went even further in the 2010/11 season, scoring no fewer than 53 official goals, a Spanish record only bettered by Cristiano Ronaldo (that very same season). Messi, like in Rome, played a vital role in the Champions League final at Wembley were scored a scorcher from outside the area to put his team ahead.

Messi also consolidated his place in the national side, now having played at two World Cups (2006 and 2010) and Copa America (2007) for Argentina. In 2008 he also went to the Olympic Games in Beijing, where his country won gold.