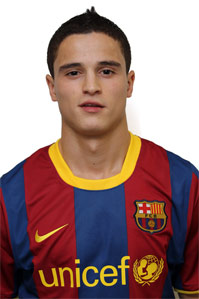 Afellay signed for FC Barcelona on December 24, 2010, five weeks after the club agreed a deal with PSV Eindhoven for him to move to Camp Nou. The Dutch international was the first winter signing of Pep Guardiola's reign in charge of the first-team.

Aged 24, Afellay was born on April 2, 1986 in Utrecht, Netherlands, with Moroccan heritage and spent his formative years in the game at USV Elinswijk. On February 4, 2004 he made his first-team debut for PSV in a cup game against NAC. Ten days afterwards he played in his first league encounter aged just 17 as the Eindhoven club met Twente.

During the 2004/05 season Afellay made seven first-team appearances, but it was in the following campaign, 2005/06, that he consolidated his place in the squad and the team. Since then he has played a minimum of 23 games per year in the league with his best term coming in 2008/09 when he netted 13 goals. In Holland he has won all the major domestic honours with four league titles, the Dutch Cup and the Supercup to his name.

With experience in the Champions League and the Europea League too, Afellay joined FC Barcelona after penning a contract and undergoing a medical five weeks after the two clubs agreed a deal. His contract at PSV was due to run out in June, 2011.

In his first half season with Barcelona he scored 2 goals and played in 28 games, often onm the wing but sometimes in a more central role, and was an important part of the league and Champions League double winning side.

The wide player, who can also play on the middle, formed part of the Holland squad at the European Championships in 2008 and the World Cup Finals in 2010, although without playing a major role in either.

Afellay is a wide player with many virtues including pace, dribbling ability and a directness that unsettles defenders. His crossing is also something that has impressed while his great technique means that he is also capable of playing in midfield.

He also is well known for his ability to shoot from distance and can take aim with both his right and left foot equally. In Holland he has already scored a number of spectacular goals.