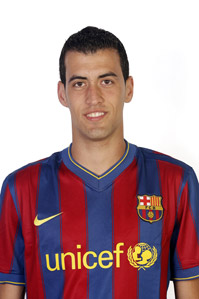 In the 2006-07 season, Sergi Busquets continued with Juvenil A and was one of the core players in the side coached by Ŕlex Garcia. In his third year at the level, and despite still being a midfielder, Sergio scored 7 goals in 26 games.

The following season, Busquets moved up to Barça B under Pep Guardiola. It was not until the twelfth match that Sergio started a game, but he immediately impressed, and was picked 23 more times that season. He scored twice and made a major contribution to the promotion to Division 2B.

He got to play with the first team in the Copa Catalunya matches of 2007-08 and 2008-09, and then Sergio made his League debut on September 13, 2008 against Racing (1-1). He came on from the start and stayed out the full 90 minutes. Busquets would get more and more chances as the season drew on, and was very much involved in the famous treble win. He started the Cup final and the Champions League final, thus ending an incredible twelve months in which he progressed from the third division to being a European champion!

His fine form for Barça has won him international recognition. He played his first game for Spain on April 1, 2009, at the Ali Sami Yen, against Turkey (1-2). He also travelled to the 2009 Confederations Cup in South Africa.

Sergio Busquets is a very complete midfielder renowned for his intelligence on the field. Born in Sabadell, he positions himself well and is a good reader of the game. Busquets adds security to the team because he rarely gives the ball away and is also solid in his defensive duties.