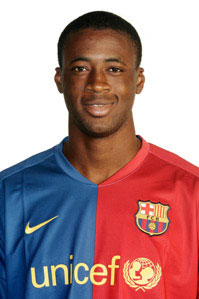 Gnégnéri Touré Yaya is the first player from the Ivory Coast to play for FC Barcelona and has brought with him immense international experience, having played in four different leagues across Europe during his career.

Touré Yaya (Sokoura Baouke, 13-05-1983) has had a remarkable route to Camp Nou. At 18 he began his time in European football in Belgium with Beveren, where he spent two-and-a-half years.

A transfer to Metalurg Donetsk in Ukraine followed in 2003, where he spent 18 months before opting to move on to Greece and join Olympiakos. During his year in the Piraeus-based club he played alongside former Blaugrana stars, Rivaldo, Haruna Babangida and Dani García as the team progressed in the Champions League.

Last summer, Touré was on the move once again as he signed for AS Monaco and went onto play 27 of the team's 34 league games during the 2006-07 campaign.

At international level, the 24-year-old is a regular in the Ivory Coast side and represented his country in their first ever appearance in the World Cup Finals last summer in Germany. He also appeared in the African Cup of Nations in the same year.

Touré Yaya is the first player from the Ivory Coast to play for Barça and is renowned for combining his strength and physical power in front of the back four with great technique. He is usually employed as a defensive midfielder and is capable of pushing forward to support the attack if required, as well as being adept at passing the ball at speed to keep moves flowing.