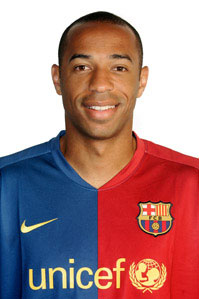 Thierry Henry is considered to be one of the best forwards in world football over the past decade. Elegance, ability and effectiveness are his main assets.

Born in Les Ulis (France) on August 17, 1977, he made his debut in top flight football with Monaco during the 1994-95 campaign, aged just 17. He began to show some of his ability on the right wing for the Principality-based outfit. After a brief spell at Juventus in 1998-99, Henry joined Arsenal, where he went on to show his true colours and become one of the best players in the history of the north London club.

Having moved into the centre of attack, Henry proved how lethal he was in front of goal at Arsenal even though he became known for drifting out to both flanks to pull his markers across the field. With him in the side, the label of 'Boring Arsenal' was forgotten as the Gunners became an attractive, attacking force in the Premiership and in Europe.

During his time in England he broke virtually every Arsenal club record. He became the Gunners' top goalscorer of all time with 214 goals and became the record scorer in the Premiership (since it was formed in 1992) with 164 goals as well as finishing as the scorer in 2002, 2004, 2005 and 2006).

His immense trophy haul includes a World Cup winners' medal as he was a member of the successful French squad in 1998. Two years after that he helped his country to win the European Championships in Belgium and Holland and then added the Confederations Cup to his collection in 2003. With over a hundred international caps, on 18 October 2007 he beat Michel Platini’s record of 41 goals for France.

He was Barça’s top scorer in the 2007/08 season, with 19 goals in the Champions League, League and King’s Cup. He is also one of the top suppliers of assists. Frank Rijkaard, who played him in 30 League games, regularly lined him up on the left wing.

Speed and technique are two of Henry's main characteristics, which he allies with efficiency and elegance. He is considered to be one of the most skilful players in the game with the ball at his feet as well as being an extremely intelligent footballer.

Despite having been moulded into a central striker under Arsčne Wenger, Henry can play across the front line, which could well prove to be very useful as he vies for a place in the Barça team with Samuel Eto'o, Ronaldinho and Lionel Messi during the 2007-08 season.