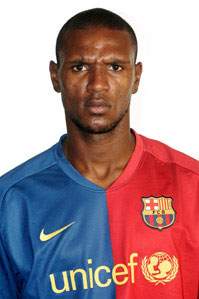 ╔ric AbidalÆs arrival in France will be the first experience of professional football outside of France for this player born in Lyon. He was signed as a replacement for Gio.

Before coming to Barńa, ╔ric Abidal (Lyon, 11-7-1979) played for four French sides. His first professional club was Lyon-la-DuchĶre, in the French CFA2 division in the 1999-00 season. A year later he moved on to Monaco in the French Ligue 1, making his debut on September 16, 2000 against Toulouse. He stayed in the principality for two years, consolidating his role as an important member of the team.

In summer 2002 ╔ric Abidal was transferred to Lille, where he played for two seasons and almost doubled his number of league appearances, playing in 35 of Lille’s 38 league games in the 2003-04 season.

At the end of that season, the full back returned to his hometown to play for Olympique Lyon, where he would stay until signing for Barcelona. In 2004 Abidal also made his international debut for ‘Les Bleus’ on August 18 against Bosnia.

He played at the World Cup in 2006, playing 90 minutes of six of his country’s seven game, in which France finished runners-up. Abidal played for three very successful seasons in Lyon, last season competing in 31 games in yet another title-winning season for his club, while also playing in seven Champions league matches and 10 internationals during his final season in France, 2006-07.

╔ric Abidal joined FC Barcelona in the summer of 2007. The Frenchman played 30 League games, 10 in the Champions League and 6 in the Cup, sharing left-back duties with Sylvinho although on more than one occasion Frank Rijkaard used him as a central defender. At the end of the season he played for France in Euro 2008 in Austria and Switzerland.

╔ric Abidal is a natural left back, although given his size (186 cm, 75 kg) he can easily slot in at centre back too. He likes to make runs up the wing as far as the opposition’s area, supplying crosses to the forwards. He is a very skilful and tactically aware player, and is noted for his ability to position himself well on the pitch.